The Artistic Side of the Psychic Twins 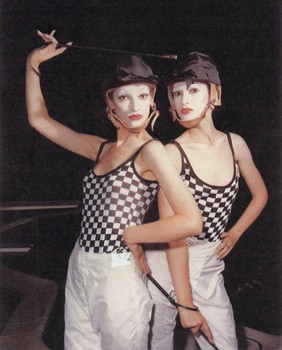 In case you're not familiar with The Psychic Twins, Linda and Terry Jamison have appeared on Nightline's special Beyond Belief, The Tyra Banks Show, The Dr. Keith Ablow Show, Good Morning America and more. They were the only psychics who predicted 9/11, as well as JFK Jr.'s death via a small plane and (get this!) the divorce of Tom Cruise and Katie Holmes in 5 years (predicted on The Dr. Keith Ablow Show, January 15, 2007...5 years ago).

However, before they were famous psychics, especially in the 80s and 90s, these red-headed twins were cutting-edge models, performers and comics--appearing on Saturday Night Live as the two-headed housewife, as well live painted statues, robotic mannequins, silver automatons, black-and-white clad mimes and kinetic sculptures.

They made all their own costumes, and did their own make-up. Indeed, both are accomplished painters (not surprising, considering Linda and Terry are the daughters of acclaimed watercolorist Philip Jamison). As if all this is not stuffing a whole lotta talent in two humans, they were also in a band called Flying Objects.

Below are some stunning images of Terry and Linda Jamison: 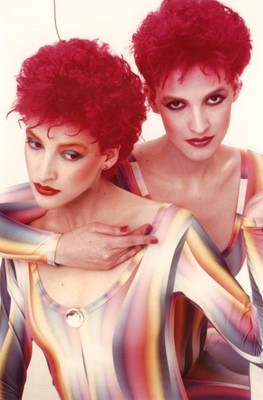 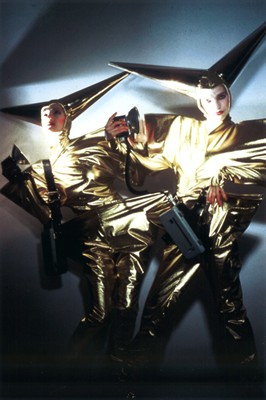 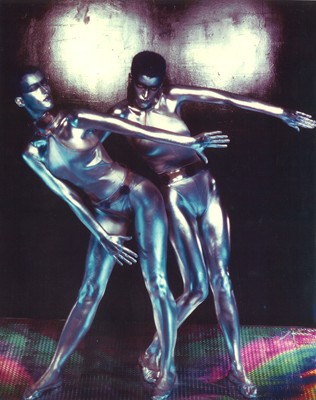 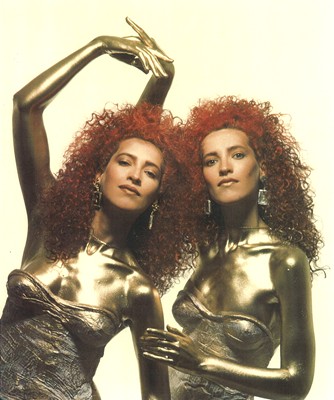 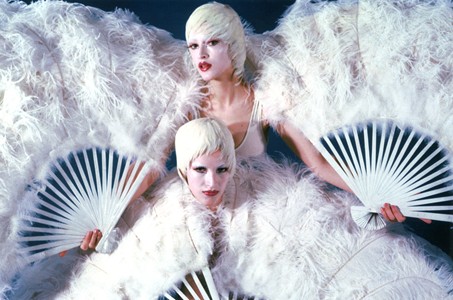 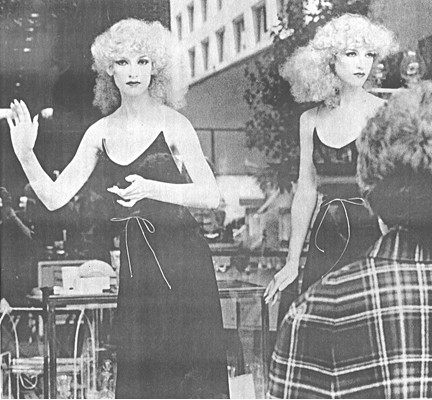 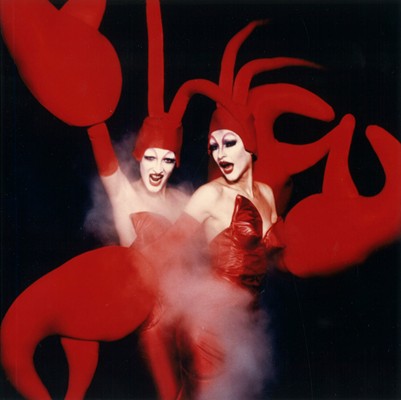 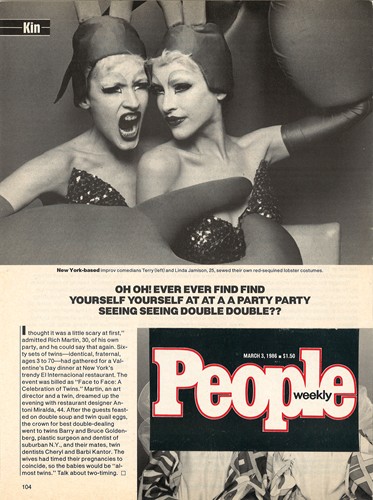 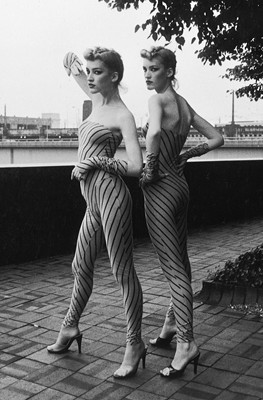 The Jamison Twins as models, Philadelphia, 1979. 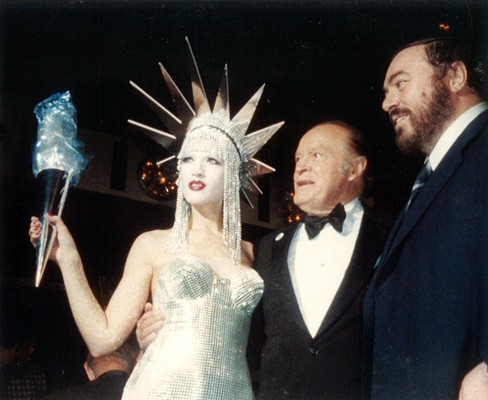 Terry Jamison as The Statue of Liberty with Bob Hope and Luciano Pavarotti, Lincoln Center "The Stars Shine for Liberty" Gala, 1983. 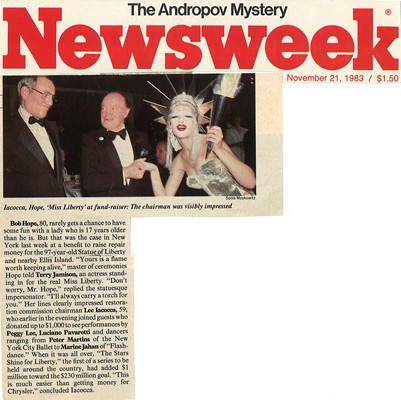 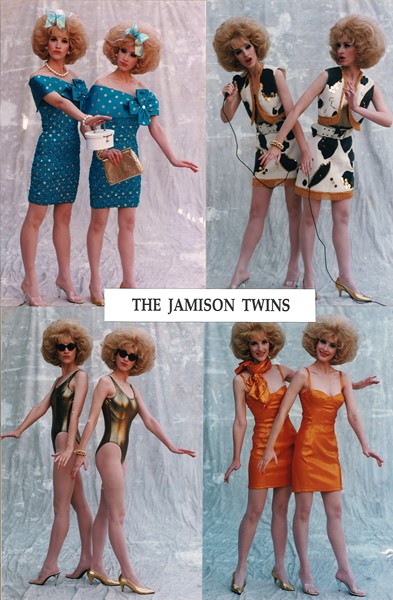 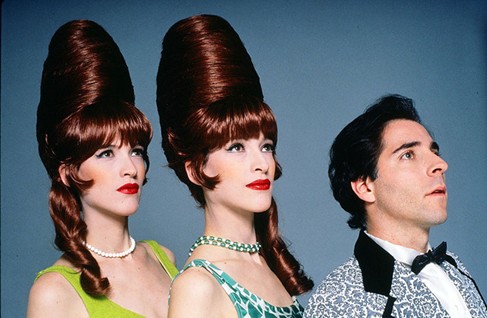 The Jamison Twins and Jesse as part of the 80s band "Flying Objects".

And here are Terry and Linda Jamison in present day, following their calling as The Psychic Twins: 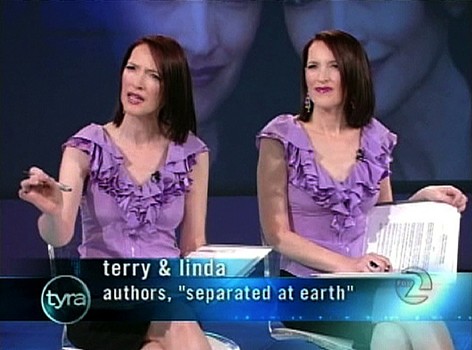 The Psychic Twins on The Tyra Banks Show

Here's a recent video clip of The Psychic Twins on Good Morning America, talking about their newest book Psychic Intelligence (now out in paperback). I've already read it and it's the best book on identifying and cultivating your innate psychic abilities.

I even had the opportunity to interview Terry and Linda last month on my Janet Boyer Live! radio show. You can listen below.

Terry and Linda were also recently on the Jeff Probst show. You can watch both parts below.

this is sad! I think its nice that Morgenstern was inspired by the Twins' story, but she should have acknowledged them and asked permission to reference Separated at Earth. I haven't read SAE yet, but I intend to. I'm not sure if I will read NC though. If I do, it will only be to see for myself how they stole from SAE. I definetly won't go to the movie. Now, if there was a movie made about the Twins, I would be there for the midnight premier! I intend to tell people about this copyright infringment. I do see how it is hard for the twins to take any legal action though. Morgenstern tweaked things just enough so that it would be hard to win a case against her. mostly I just feel for the twins. SAE it the story of their lives and deserve to at least be recognized in NC as having inspiried the book!

It's very sad, Krisy...especially since the publishing world, many who have been notified of this, are turning a blind eye. :oP They better not whine when it's THEIR book next!