Behind the Scenes of the Snowland Deck - Wilson Bentley's Snowflakes

Ron and I consider Wilson "Snowflake" Bentley the patron saint of our Snowland Deck. You can find out more about this extraordinary man at SnowflakeBentley.com.

We chose Snowflake Bentley to be our Nurturer Material card since he so diligently pursued the study and preservation of snowflake images. In fact, he was the first person to capture snowflakes on film.

Ron and I pored over hundreds of photographs depicted in the book Snow Crystals by Wilson "Snowflake" Bentley and W.J. Humphries, selecting our absolute favorites for this card which Ron then painstakingly reproduced. 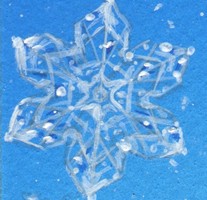 We hope you enjoy learning about Snowflake Bentley as much as we have, as well as gain a greater understanding and respect for the card traditionally called the "Queen of Coins" in the Tarot--a card whose traits this amazing man embodied in so many ways.