Home Tarot Life Coaching Etsy Shop Newsletter Coffee Tarot Snowland Deck
Commonly Confused Words Part 2
I Am Not a Candy Machine (Or, Why I Am Not A Fortuneteller)

I have found Tarot cards to be a wonderful source for inspiration for creative writing. There are literally thousands of decks on the market! Because of the rich diversity of themes, symbolism, and artistry, Tarot cards are an exciting, easy and portable way to spark the imagination.

Tarot cards can be used to originate themes in your creative writing, as well as generate character personalities, names, plot points or even dialogue.

Let’s say you’re in the beginning stages of creating a short story or novel. Or maybe you're going to dive in to the November madness known as NaNoWriMo. What do your characters look like? What are their names? Their personality? You can receive inspiration to answer these questions using Tarot cards. 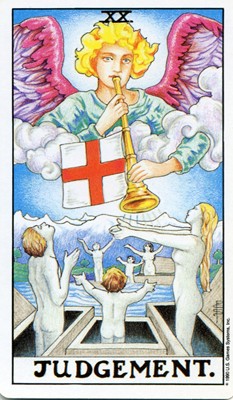 Here’s an example: I want to flesh out a female character, including her name, occupation and some personality traits. Using the Universal Waite Tarot, I shuffle and draw Judgement.

For a name, I can riff on the card title: Judith? Judy? Last name of Judge? Judd? Or maybe she likes the music of the Judds? Looks like Ashley Judd?

Personality wise, maybe she’s an actual judge. Or judgemental. What kind of occupations could involve criticism or even judgmentalism? A book critic? Headmistress? Mother superior? Minister?

What about looking closer at the imagery. Could she be a mortician? Coffin maker? Trumpet player? Or maybe an exacting conductor or perfectionistic composer? Maybe she’s a no-nonsense head nurse on the battlefield (notice the red cross on the flag)?

Maybe your character is a Joan of Arc type personality, who is “sent” to be a group’s “salvation”. Or perhaps she’s an actual angel…or a woman with a messiah complex.

Trumpets usually announce important people or messages. In fact, in the Greek, angel comes from the word angelos which means “messenger”. Maybe your character is a town crier. Or the town gossip. Or she really does bear an important message that must get delivered…or else.

See how much I was able to glean from must one Tarot card within a few minutes?

Tarot cards can also be used to determine conflict–man versus man, man versus nature or man versus himself. Conflict is important in a story because it carries the plot forward, provides tension that begs for resolution and hooks a reader’s interest. You may choose the cards at random, or consciously select them based on what appeals to you.

Either way, the Tarot cards you draw can provide a wealth of ideas for characters, conflict, setting, dialogue and plot.

For example, draw a Tarot card to represent the nature of the conflict. Then,  draw a card for each of your characters, showing how they are involved with, or react to, the conflict at hand.

Whether you choose to interpret the cards according to the deck creator’s suggestion, tradition, keywords, a book, a blog or according to inspiration received from the image itself is entirely up to you!

You can even perform Tarot readings as your character/s to get insights on what they are thinking, feeling, wishing or will be getting. Below are a few I've made that are posted here on my blog:

The Loop Spread (by Craig Conley)

Empress and Emperor in the Garden Spread

You may also want to check out my eBook Occupations in the Tarot: A Guide for Readers and Fiction Writers.

So, tell me, what are your biggest challenges with creative writing? Have you ever used Tarot to write a story, poem or book? Do you have any questions for me about the cards and how to use them--for writing, personal growth or divination? Feel free to comment!

By the way, are you new to Tarot? Here are 20 things you should know.