Home Tarot Life Coaching Etsy Shop Newsletter Coffee Tarot Snowland Deck
I Am Not a Candy Machine (Or, Why I Am Not A Fortuneteller)
The Snowland Deck is FINISHED!

Your Deck Is Too Expensive

I’ve seen some people complain that our Snowland Deck is “too expensive” at $55. On behalf of Ron and myself, and deck creators everywhere who self-publish, please allow me to share some of what goes into creating, and publishing a Tarot or oracle deck.

As you read the following, remember this: we have not received any monies towards our project from any source at any time, other than orders for our Life Themes Edition (which was but a handful) and pre-orders for our full deck—which we’ve only opened up summer of 2012. 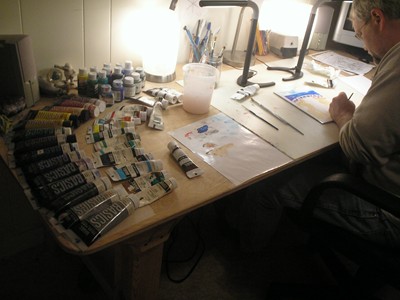 Ron and I have invested over two years into our Snowland Deck project. Ron gave up two entire summers (No swimming! No garden!), which you can hear him speak about here in my video interview. The amount of hours we spent just on research—including reading biographies, myths and fairytales—number in the hundreds.

Then, there was the amount of hours spent scripting each and every card, which included scrapping some ideas and modifying many. Each card, for us, had to serve something greater: the structure and import known as Tarot.

For each card, I created at least six keywords or phrases. I’ve also devised several systems for our deck that have never been done before—a significator “Soul GPS” system, and a Secret Symbol Connection system.

I asked Ron to estimate how many hours he spent painting each card. Around 20, he says. Our Snowland Deck contains not only the standard 78 count of a Tarot deck, but also two different card backings (one for the Life Themes Edition, another for the full deck). It also contains four special significator cards. That’s 84 cards. Total estimated hours just painting: 1,680.

Our son, too, created a special card for our deck: Chillaxin. He drew and colored it by hand, but I told him that it would have to be digitized to fit into the theme. So he got into his MS Picture It! 2006 and digitized his own card.

And then there’s the actual tools of the trade. Ron goes to Home Depot and has them cut down Masonite boards. He then brings them home and cuts them down further in his woodshop. He then sands the wood, and paints three coats of gesso on each board (waiting for the paint to dry between coats). In addition to the cost of the wood, Ron must buy acrylic paints, brushes, gesso and frisket. 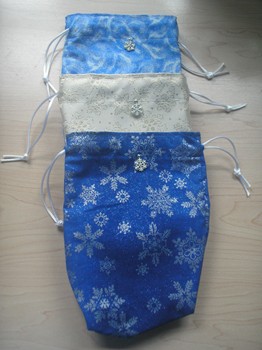 Then there’s the special bags for our deck. I bought over 30 yards of hand-selected fabric at JoAnn’s. I then had to design how the bag would be made, and then gave the pattern to a local seamstress who we pay to make the bags for us. Each bag also includes a sparkly, pewter snowflake charm that I hand-sew on the bag; it retails for over $5 a charm.

Then there’s the image preparation. For each card, I scan Ron’s painting and put on white borders so they look like cards for the internet. I don’t have any fancy programs, just Microsoft Picture It! 2006, so this takes some time. I then resize the images and put them on our website so that individuals know exactly what they’re getting when they order our Snowland Deck.

I then must prep each image according to the printer’s standards which takes a fair amount time. I had to learn how to use the printer’s online interface, and do all the ordering.

And then there’s the packaging. Ron and I wanted to make each package special, so we get sturdy white boxes and prepare them with loving care: tissue paper, hand-written thank-yous, glitter, and special extras “just because”—in addition to our deck and bag. You can read about this in two online reviews at Tarot Notes (Zanna Starr) and 78 Whispers (Amanda Donnelly).

And Facebook? We’ve sunk hundreds of dollars into promoting posts and taking out ads to raise awareness of our Snowland Deck, perhaps in the thousands (about ready to do taxes, so I’ll know for sure soon!). We’ve not only had to do this because of Facebook’s bizarre policy of not allowing fans to actually SEE the content of the pages they’ve fanned (in essence, holding posts hostage), but also because Stephanie Arwen Lynch bullied the American Tarot Association Board into NOT allowing any reviews or mentions of my work in the ATA Journal OR Tarot Reflections—including our Snowland Deck—just because she doesn’t like me.

Also, Solandia, for reasons unknown (she will not answer my emails to provide an explanation), banned me from her Forum around 6 years ago and will not allow our Snowland Deck—nor, indeed, ANY of my books or work—to be discussed on ANY thread at the largest Tarot website/Forum on the web that she owns: Aeclectic.net. 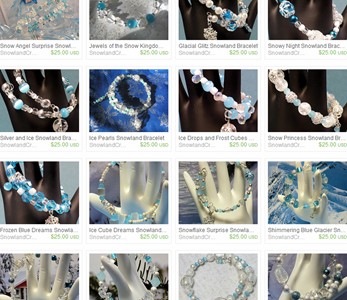 We’ve also commissioned Zanna Starr, aka Jewelry by Scotti, to make gorgeous custom Snowland bracelets--like snowflakes, each are different--to go with our Life Themes Edition deck and the Platinum and Gold packages of our full deck. All out of pocket expenses.

After reading all that, does $55 for a deck and bag sound like a lot to you? The price includes shipping and handling in the U.S., with the price slightly higher for international shipping and customs (which is outrageous). The price also includes an all-access pass to the secret Facebook Snowland Deck Explorers Group (unlike some deck creators, I'm not asking anyone to pay me $12 a month just to interact wth me or get special videos or extra goodies connected with our cards) and a full-length companion eBook which includes 7 intuitive questions, 5 writing prompts, 3 affirmations and a "secret" for each card--plus special Snowland spreads.

Now, consider all the ways our deck can be used. (You can read about it here.) Sure, you can grab about four mass-produced decks to equal the price of our Snowland Deck. But, let’s face it, mass-produced decks aren’t special. They’re tossed about and traded as if they were cheap trading cards.

We consider our deck not only a work of art, but also a profound tool for self-awareness, creativity, storytelling and communication.

While we’re here, consider this: 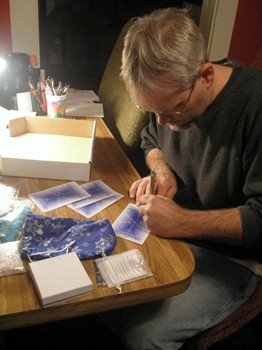 How much is art worth to you? What about a deck that provides delight, insight, inspiration and intuitive flashes? Individuals pay for what they value, simple as that. If you're not sure what you value, just look at where you spend your money.

Only you can determine that. But, please, before you complain that a deck “costs too much”…consider what it cost the creators.

To those of you who have supported us on our journey from the very beginning, we thank you from the bottom of hearts for your steadfastness and encouragement. Orders from all over the world are pouring in and we're grateful.

For those of you just discovering us, welcome to our frosty world!

It's been a labor of love, and we wouldn't trade the experience for anything.

Well-explained, Janet! One can instantly identify a non-creator type when he or she balks at the price of art. And, of course, such types have already answered your question, "How much is art worth to you?" thusly: nothing. They don't need your deck at a discount -- they aren't equipped to appreciate it at any price.