Laughter (Through the Eyes of Tarot) - Blog Flash 2013 I'm participating in author Terry Giuliano Long's Blog Flash 2013 for the month of March (every weekday), and today's prompt is about Laughter.

I thought it would be interesting to take most (perhaps all) of Terry's prompts and examine them through the eyes of Tarot.

So what Tarot cards indicate laughter?

Sure, The Fool loves to laugh. He's pretty oblivious to danger and just about anything can make him (and others) giggle...especially if he shows up as the Clown or Jester archetype.

But when I think of laughter, it's not The Fool that comes to mind. 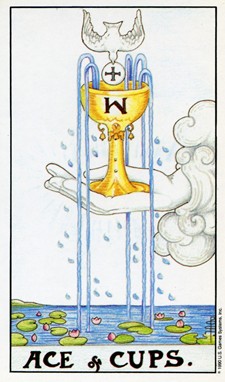 No, for me, it's the Ace of Cups--that artesian well of bubbling emotions. While it's true that the emotions flowing from the Ace of Cups aren't necessarily joyful (especially if reversed, ill-aspected or in a challenging spread position), when upright--of all the cards in the Tarot--I see "laughter" emanating from it.

Not silly Fool laughter that snickers at crude jokes, pratfalls or misfortune but, rather, the laughter that bubbles up in the form of a release (especially after a good cry or hardship)--or, giggles erupting out of innocence (especially as displayed by small children).

What about you, dear readers? What Tarot card/s do you associate with laughter? The Fool? The Sun? 6 of Cups? Ace of Cups? I'd love to hear your thoughts!