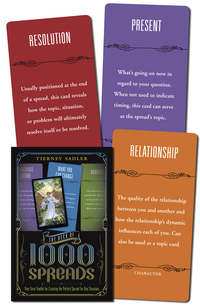 “To get a better understanding of how a spread works, think of a tarot reading as a novel—stuff that happened and who was involved. But without some sort of organization, it’s all just a random pile of words and information.” – From the book How to Use Your Deck of 1000 Spreads by Tierney Sadler

Ah, the amazing Deck of 1000 Spreads. Incredibly, no one thought of this brilliant idea before (or, didn’t have the courage to create or publish it until now): a labeled, color-coded deck of cards listing spread positions and what they mean.

Seasoned and professional Tarot readers know how aggravating it can be do be in the midst of a face-to-face reading—especially with clients or addressing complex issues—and forget the designation of a particular position (especially with on-the-fly spreads).

“Wait. Did I say that position indicated The Past…or What Needs Released?”

Ack! It’s happened to the best of us.

Fortunately, Tierney Sadler had the experience and foresight to eliminate this pesky problem by crafting the Deck of 1000 Spreads and its 137-page companion book, published by Llewellyn. Separated into five categories (Influences/Blue, Topic/Green, Outcome/Red, Character/Orange and Timing/Purple), this 59-card deck covers just about every question addressed by the most popular spreads used by Tarot readers: The Celtic Cross, Horseshoe, Star and various 3-card layouts. 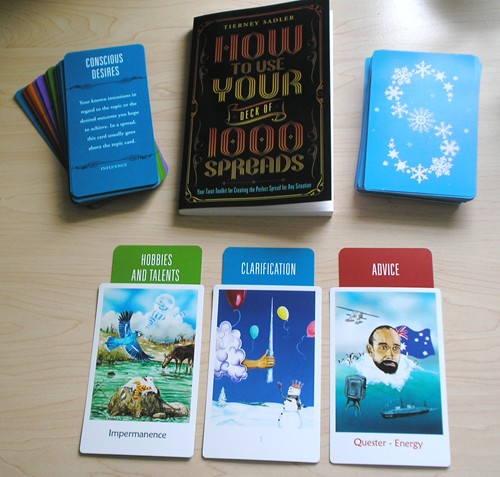 Unfortunately, positions from the Zodiac Spread and Chakra Spread (two of my favorites) aren’t provided, nor are there cards geared towards novelists (protagonist, antagonist, villain, sidekick, subplot, turning point, complication and so on). Those types of cards would have greatly enhanced the Deck of 1000 Spreads, especially since there are only six blank cards for those types of permutations. Granted, some of the cards could be “stand ins” for a few of those positions, but not most of them.

Despite my “wish list” for this deck, it’s still a fresh, welcome addition to the world of Tarot and a reader’s toolkit.

I’ve given the Deck of 1000 Spreads several test runs, with clear, insightful results. I often have tons of irons in the fire, so I asked the Tarot “What needs to be my main thrust right now in terms of creativity?” 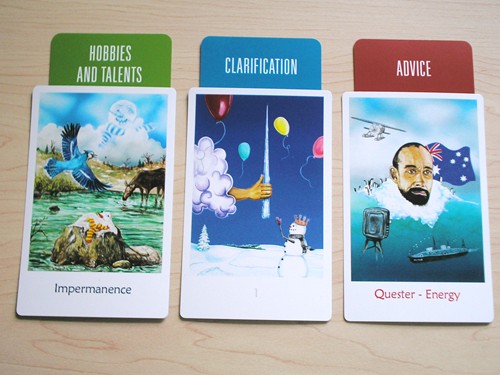 I then selected Hobbies and Talents card from the Topic/Green pool, since it “Addresses the current state of your creative energies. When not used as the spread’s topic card, it can advise on creative endeavors”. From the Snowland Deck, I drew Impermanence (Death). This card shows a melting snowman, a flying bluejay about to eat a bug, a moose drinking from a lake and the spirit of the snowman among the clouds, winking.

I thought of how this card is traditionally associated with Scorpio, my Sun sign. Scorpio deals with penetrating truths, deep wisdom and transformation; it’s a lot like the Phoenix mythos. Yet, Impermanence also deals with something “passing away” in the cycle of life...or the resistance to change.

Was this card saying that I needed to let one part of my creative endeavors go—the one that I’ve been doing the longest—to make way for a new focus?

I then fished out an Influence/Blue card: Clarification. I shuffled, asking for clarification for the Impermanence card. I drew the Mental Ace (Ace of Swords). I couldn’t help but chuckle because this card shows a pointed icicle being offered from a cloud to a very eager snowman on a bright, clear winter day….clarification personified! It’s also a card hinting at sharp, pointed, focused communications—an approach that happens to be my trademark. I took this to mean, “keep being you”.

So then I selected an Outcome/Red card, Advice. What was the Tarot’s advice, then, in terms of my creative output? I drew Quester Energy, the equivalent of the Knight of Wands. In the Snowland Deck, this card—featuring famed Australian polar explorer Sir George Herbert Wilkins—portrays the consummate Renaissance Soul as his various exploits and talents. He was “all over the map”…just like me!

So I weaved it all together as a message to keep pushing for the hard truths in life, expose bullshit when I see it, and celebrate being a polymath (rather than sometimes thinking it’s a liability). And, that having several creative projects going at one time is what I’m good at and what will fulfill me.

The companion book How to Use Your Deck of 1000 Spreads provides a wealth of ideas on how to vary spreads, switch out cards and create your own. And, as the author points out, "1000 Spreads" is a misnomer: with all the cards in this deck--and the option for choosing to arrange or select them consciously or randomly--there are literally tens of thousands of possibilities.

I'm especially excited to try out the chart method, where cards from this deck are arranged outside a grid as placeholders, and then Tarot cards are placed in horizontal and vertical rows. What an innovative way to see a situation from various angles or explore how an issue may impact several people all at once!

Although intermediate and advanced Tarot readers will likely be the most comfortable using the Deck of 1000 Spreads, there's no reason beginners couldn't cut their teeth on card layouts using this box set. In fact, it may very well save them months (or years) of grief that many experienced readers endured muddling on their own without such a handy, accessible tool.