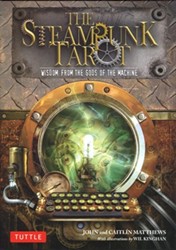 “And since, above all else, Steampunk is about adventure—wherever, whenever and whoever it features—it seemed high time that there should be a way of looking into and through the strange distorting glass of this new-old world, and to explore its vitality and wonder, and its wisdom. Just as we may turn to the tarot to aid us in navigating the shoals of uncertainty which surround us, so, in the alternative world of the Steampunk Imperium, it opens vistas that help us to see things in a new way.” – From the Steampunk Tarot companion book by John and Caitlin Matthews

From hulking dirigibles to clockwork devices, intricate gears to steam-powered machines, the alternate world of Steampunk blends historical accoutrements with futuristic visions. A realm that evolved alongside our own but with various divergences, Steampunk embodies Victorian dress and manners with Edwardian industrial advancement. Add some clean fuel derived from amber (Pullman’s “anbaric powder”), metaphysical experimentation, conscious automatons and thirst for adventure, and you’re witnessing the essence of Steampunk.

In the scholarly, playful hands of John and Caitlin Matthews, Steampunk—sometimes derided as “goth dressed in sepia”—finds a fresh, bold presentation when melded with Tarot structure and philosophy…a combination resulting in a complex, intelligent oracular system and set of cards. 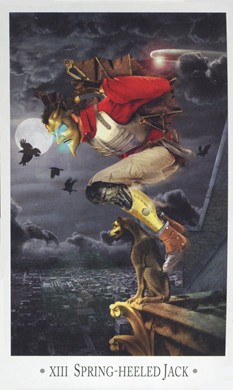 In the Steampunk Tarot, all but three of the Major Arcana—known as the Gods of the Machine in this deck—are renamed, as are the four Minor Arcana suits (Leagues) and Court Cards (Ligates).

The Four Leagues are Leviathans (earth), Submersibles (water), Airships (air) and Engines (fire). The Four Ligates that govern the Leagues are Messengers (Pages), Navigators (Knights), Ladies (Queens) and Captains (Kings). In the 160-page companion book, the Matthewses also provide elaborate subsystems where four Regulators (Gods of the Machine) correspond to each League, as well as eleven complementary opposites and seven initiations of the Apprentice (seven triads).

I did say the Steampunk Tarot was complex, right?

Even if you decided to forgo understanding or (trying) to apply the convoluted (but fascinating) methods of the Matthewses, the cards themselves still prove a bit inscrutable, owing to detailed imagery of fantastical equipment, intricate technology and unrecognizable paraphernalia. Thus, those who glean scads of intuitive information by illustrations alone may find the illustrations by Wil Kinghan challenging to interpret.

However, for those intrigued by the idea of Steampunk sensibilities and hierarchical structures superimposed upon Tarot archetypes, the Steampunk Tarot vastly rewards the patient, the curious and the bright. The companion book is a thinking person’s playground and the metaphysician’s delight. Rather than simple keywords for each card, the Matthewses give seekers a holistic, perceptive overview, as well as personal lifestyle, interaction and impact (both upright and reversed). A “Steampunk Wisdom” phrase also accompanies each card. 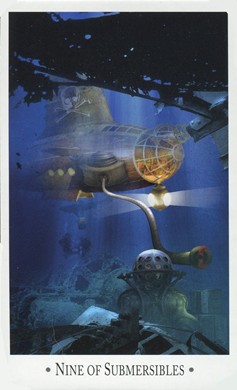 The authors also provide a spread for each of the Gods of the Machine (Major Arcana). Most any Tarot author can slap together a spread, but to craft twelve substantive layouts (corresponding to the 22 Majors) that each provide an insightful, meaningful blueprint for a seeker is extraordinary and commendable.

I’ve been using the Steampunk Tarot for the last week with amazing results. Not only have my readings been incredibly accurate and insightful, but also empowering. When I asked a question and drew Triumph (Trump 7, correlating with The Chariot), I was so encouraged by what the Matthewses wrote about this card that I decided to go a step further and try out their 4-card Triumphal Procession Spread.

I was so blown away by the psychological depth and precision of this spread that I’ve placed the four cards I drew in a prominent position on my desk to remind me of the journey I’m on, what keeps me on the road, the obstacles I need to avoid and my final (project) destination.

It’s obvious that much care and thought when into both the imagery and companion book, so rousing kudos to the publisher (Tuttle), authors (John and Caitlin Matthews) and illustrator (Wil Kinghan) on this superb addition to Tarot literature and thought. My Steampunk Tarot stands ready, awaiting yet another intronautic journey where visions become reality and otherworldly guidance manifests for my soul’s evolutionary enjoyment.

To see 16 more images from this deck, click here.