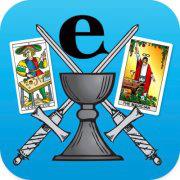 Ron and I are thrilled to announce that we've signed a licensing agreement with Tarot eCards, owned by WizardToo. WizardToo was founded by Ron Leong, former marketing director at U.S. Games Systems, Inc. and my former boss when I was the USGS Social Media Maven. (I call him C-Ron, short for "Corporate Ron", to distinguish him from my Ron.)

Our Snowland Deck should be available by the end of June via the iTunes store for use on both iPhone and iPad.

We're in good company, too. Fellow deck creators include James Ricklef (creator of the stunning RWS 2.0 for this app, and whose Tarot of the Masters will also be available), Mary Griffin (creator of one of my absolute favorite decks ever, the Hezicos Tarot), Liz Hazel (creator of the Whispering Tarot), Lon Milo DuQuette (Tarot of Ceremonial Magick) and others.

If you're going to the Readers Studio next week in New York City, C-Ron will be at the Merchant Faire selling print copies of not only our deck, but also the others featured in the Tarot eCards app. Our deck will be in a frosty bag (one of three fabrics), but will not have the sparkly pewter snowflake charm, the four "Soul GPS" significator cards or Noah's Chillaxin card, nor will it come with access to the secret Snowland Explorers blog or a digital copy of the Snowland Deck Companion (you must buy your deck from us at SnowlandDeck.com to get those bonuses). However, our deck will be discounted at RS13 by $20 since it will not include all those goodies.