Why I'm Not Doing the Next Best Fiction Author Contest 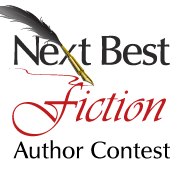 When I stumbled on a Facebook page announcing a Next Best Fiction Author Contest, I was intrigued.

Even more so when I realized it was sponsored by Hampton Roads, the publisher of my first book, Back in Time Tarot.

In addition to my Tarot writing, I'm also working on the first book of a cozy mystery series called Scry Me a River. I'm almost done with Chapter 5 with 11,000+ words written

Hmm. I thought. Might be interesting to enter my mystery novel in this contest. After all, I had a great experience with Hampton Roads for my first book.

So after I signed up for the free contest, I asked a question on the Next Best Author Facebook page. Radio silence. Weeks later, still no response.

According to NextBestAuthorContest.com, contestants will download the first two chapters on April 15th. We were to watch for "important details" via email. Well, here it is, April 10...and no details. 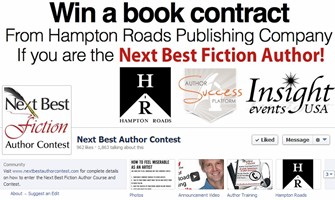 I just visited the Next Best Author Facebook page to check for updates and what do I find? Several individuals asking for specific information on the contest and downloading files...with no replies to them, either.

So, I've decided to not enter the Next Best Fiction Author Contest for the following reasons:

1. Hampton Roads publishes Mind/Body/Spirit titles...not fiction. Whether they're trying to enter the fiction market is unknown, but why should I risk my fiction book on a company with no fiction traction?

2. The website appears to be secondary to an "Author Training Course" taught by Randy Davila...for a price. It appears he's modeling himself after Reid Tracy and Hay House in terms of reaching out to authors.

3. The contest hinges on "public voting", so it will probably be easy to game the system. The website doesn't disclose if popular vote snags the contract, or a combination of total votes and editorial approval.

4. Hampton Roads doesn't have a social media presence for their titles. At all. Sure, Randy Davila does--as president of Insight Events, Hierophant Publishing and Hampton Roads. But, again, these are all "how we can help you get published" campaigns that cost authors money. How is the promise of giving the winning author a "social media presence" an incentive, if the founder of Hampton Roads doesn't even have a dedicated FB page, Twitter account or blog specifically featuring--and about--Hampton Roads titles? Since Hampton Roads is now distributed by Red Wheel/Weiser/Conari--now the Red Wheel Group--it appears that Mr. Davila has allowed his titles to become folded in with the RWG's social media efforts. But, again, you'd be hard pressed to find dedicated posts or tweets about actual Hampton Roads books or authors.

Thus, why would I want to enter my novel-in-progress for the Next Best Fiction Author Contest if:

What do you think, dear reader? Does this look like an attractive contest to you? Or just a clever way to promote their "Author Training Course", hoping that authors desperate for publication (and increasing their odds for the contest) will fork over $100 or more for such "training"?

Glad to see it's not just me. I've been confused for weeks now as to how exactly I'm supposed to sign in. There are username and password fields on the contest site, but no way to register a username or password. :C

On April 11, I received this response from owner Randy Davila on my personal FB page (where I linked to this blog post):

"Hi Janet! Thanks for your feedback, it's always good to get another perspective! And just to clarify, there is a private group on facebook for authors who are registered for the contest, and and contest related questions are answered there as opposed to this fan page (which you are correct, it not monitored closely for questions). All the best to you!"

I replied: "Really? I registered in March and never received notice about a private FB group. Why is this? You didn't offer to add me here, either. (Received an automated notice saying I was, indeed, registered.) If you have a fan page for soliciting contestants and authors to buy your course--and you have time to post daily writerly cartoons and quotes--why in the world aren't you bothering to monitor your page for questions? Social media presences aren't billboards...they're for ENGAGEMENT (hence, the "social"). Your reply confirms my concerns were more than justified."

Here it is, April 16...and still no reply from Mr. Davila. And, no email about uploading the MS, either.

I did something similar and ended up getting a response. This is the link to the private group: https://www.facebook.com/groups/485204668213246/

You have to click Join, and they'll add you. Also, this link lets you create your login information and upload your content: http://nextbestauthorcontest.com/author-login/

Hope it works for you. Not that it necessarily means you'll participate. So far, I don't have a lot of confidence in their contest-running abilities!

Did they explain why you weren't notified of the private FB group?

I just tried to join the private FB group. We'll see what happens.

I have to say, it sounds sorta rigged to me...

He seemed surprised that I hadn't been. Apparently there's supposed to be an email that gets sent out, and he basically said it seems to be mostly working, because there are people in the private group. I'm not really sure. I don't like the fact that judges make the final decision.

Very interesting. And how much do you want to bet that judges will only pick from the pool of contestants that paid money to take that publishing course?

This is Typepad support testing your comments. Feel free to delete this.

Two days later, and I'm STILL not added to the "secret" FB group...

Weird. Try messaging Jacob, he's the one who helped me out. https://www.facebook.com/jacobnordby

Jacob replied quickly...with this: Oh hi, Janet
Randy Davila asked me to refer you to chat with him about this.

I passed on my email to Jacob, which Randy obviously already has since I'm a Hampton Roads author. It's been three hours and...nothing.

Hi Janet. Interesting read. However, I think differently. I think HR is on the lookout for new markets to spread their Mind/Body/Spirit-themes. What if someone would stay within that frame, only presenting them through fiction? And/or maybe in a language that would hit home with new audiences? I know I would think like that if I were a publisher. :)

Nothing wrong with expanding M/B/S themes into fiction (although their "contest" doesn't require that narrow focus).

Incidentally, I never did hear from President Randy Davila on why I wasn't added to the Facebook group, nor why I wasn't emailed materials to enter my MS.

My opinion of HR, under his direction, has went south because of this lack of transparency and professionalism.

I joined the publishing course first...and because of Randi, I entered in the contest as the publishing course had been awesome. Unfortunately I can't say the same for the contest and how it was run. I had asked several questions and was becoming more and more frustrated with no responses or solutions to the problems and then was as much as 'told off' by the administrator who made light of everything that was going wrong...not just for me. The voting platform didn't work, and we kept getting told it was working when it clearly wasn't, no one sent out information about those who moved on to the second phase except through FB which members then had to pass on to each other. To top it all off many of the contestant authors were already published, and some many times. One that I was aware of, naturally made it to the second round which she went on to brag about. If you're not a FB fan, it's not possible to enter. And as of today...I still don't know who won.

I had a feeling the "contest" was nothing but a ploy to get people to purchase the "optional" (but recommended) publishing course. I've lost all respect for Hampton Roads now, because Randy Davila is the owner and publisher.

If he can't answer basic questions about a contest on the public Facebook page, randomly prohibits entries (and thus, gaming the system), refuses to reply to emails and posts about the glitches, passes off responsibility to someone named Jacob Nordby (who also refuses to answer questions)...what does this say about his ability to run a publishing company? His knowledge about publishing? His character?