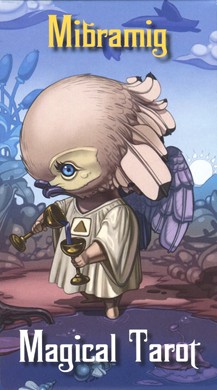 Elongated countenances and bloated visages of sundry animals appear throughout theMibramig Magical Tarot. According to artist Mibramig, the deck’s creator:

“As the great masters of ethology, from Konrad Lorenz to Gerald Durrell, teach us, some animal behaviours are surprisingly similar to those of man. Vice-versa, in many situations of our existence, we humans behave oddly and bizarrely in an animal-like manner. In theMibramig Tarot, animals represent the many masks of the human soul. They are symbols of our feelings, of our attitudes, and of our ways of being: playful, happy, and amusing, symbols that, precisely for this reason, are bearers of profound truths.”
I couldn’t agree more.
I feel this is one reason the Tarot of the Animal Lords works so well.
However, what we have in the Mibramig Magical Tarot are caricatures of animals—a mishmash of distended heads, melonesque female boobs and human genitalia—all served up on the same ol’ Tarot template: the Rider-Waite-Smith milieu.
Not just “inspired by” the RWS, mind you, but actual duplication of the poses and settings.
::sigh::
Yet another opportunity lost to re-imagine Tarot, especially through the eyes of mammals and birds.
The very few images of the Mibramig Magical Tarot that I spotted online intrigued me. As a fan of both the Tarot of the Magical Forest and the Deviant Moon, this deck seemed to be a curious, playful melding of those two decks’ sensibilities. 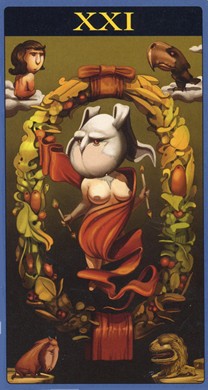 When I got the deck in hand, though, the adorableness that graced the online samples just weren’t present in most of the deck. In fact, I found the inclusion of human genitalia and backsides on the animals (especially the couple in The Lovers, the white cat in The Star, the central figure in The World and the bird people in Judgement) downright disturbing (and not in a cool, Deviant Moon sort of way). I couldn’t find any Minor Arcana cards online, so had I known that the Mibramig Magical Tarot was a RWS clone, I would have likely passed on this deck.
Although the artists claims that the connection between human and animal behavior underscores the deck, the L(ittle) W(hite) B(ook) offers no explanation of why certain animals were chosen for the Major Arcana or the suits.
For example, why the elephant for The Magician? The giraffe for The Empress? The walrus for The Emperor? The toucan (I think) for Justice? The bunnies in The Tower? And, why dogs for the Cups suit, goats for the Wands suit, primates for the Swords suit and birds for the Coins suit? (Maybe there IS no reason for such choices other than artistic…?)
While the LWB begs for such illumination, the concise card interpretations provided are quite good. Even the Tarot fad of the Happy Squirrel card, also included in this deck, is explained. 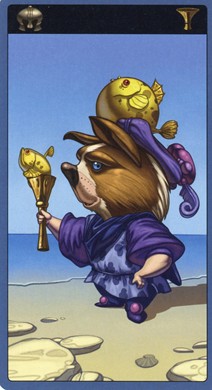 Because the animals lack dynamism (gosh, those poor dog/human hybrids in The Lovers look dejected at worse and bored silly at best—and the goat on the 6 of Wands looks so unsure that he deserves the honor), I feel that Tarot beginners might have a hard time reading with this deck. Not only that, the Majors are merely numbered and the Court Cards are identifiable just by suit and element icons, which may also prove problematic for newbies.
If you love the card images included with this review and found online—and don’t mind the RWS imitation—you’ll no doubt be happy with the Mibramig Magical Tarot. I really wanted the rest of the card to match the few images I saw online, but sadly, this deck just doesn’t work for me.
To see 16 more images from this deck, click here.
-- Janet