The Magician Magazine from the Tarot Guild of Australia

Here are three sneak peeks from the Tarot Guild of Australia﻿'s newest issue Autumn 2013 (they're in the Southern Hemisphere, hence Autumn instead of Spring).

I wrote a 4-page article about our Snowland Deck's Energy suit (aka Fire/Wands), and our snowy owl (Teacher) helped inspire and guide the wonderful editor, Mordreth. Also, our Magician card graced the back of the magazine among other fine renditions from various decks. 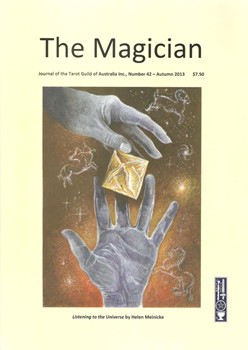 I have a copy of their LAST issue and now, this issue, and I have to say...it's the best Tarot magazine I've come across. (I wish we had a reputable, thriving Tarot organization in America that not only boasts professionalism and inclusivity--as the Australian Tarot Guild does--but also a kick-ass magazine, to boot).

(Yeah, isn't it ironic that a Tarot organization half a world away wanted to showcase our Snowland Deck﻿...while the American Tarot Association﻿ under the Stephanie Arwen Lynch﻿ regime has told the Editor of the ATA Quarterly, Elizabeth Hazel, that she is NOT to review--or assign for review--ANYTHING written or created by me for ANY ATA publication. Just out of personal dislike, mind you. Censorship, anyone?)