“Choosing animal spirits to represent the various cards was an adventure in co-creation. Contemplating each card’s essence, I turned inward, opening my intuition and imagination, and invited an animal representative to appear. Some that showed up seemed obvious choices; others were surprising.” – From the companion book to the Animal Wisdom Tarot by Dawn Brunke

Bison, owl, shark and spider, the world of animal medicine provides a deep, ancient reservoir of both practical and spiritual wisdom. In the past, diverse cultures and tribes have relied on the messages from the animal world—sea dwellers, birds, insects, mammals and amphibians—to guide group decisions and answer personal questions.

When you combine the breadth of animal wisdom with a comprehensive structure that addresses all aspects of life—in this case, the Tarot—a powerful tool emerges. 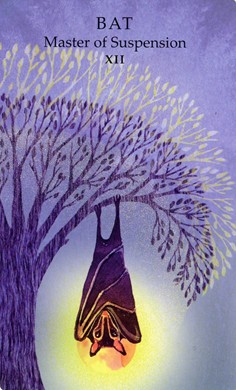 
Author Dawn Brunke does a wonderful job of describing Tarot structure, even including certain symbols within the cards to remind readers of numerological and rank considerations. For example, all the 4s in this deck contain four-leaf clovers, all the 7s include rainbows, all the 10s have Xs (X marks the spot!) and all the Seekers contain bridges. However, she notes that all the 2s include a Yin/Yang symbol—but there is none on the 2 of Feathers (Heron).


Also, she mentions that the ancient symbol of the pentagram is featured on all 5s, but an actual pentagram is ONLY on the Five of Branches (Scorpion). The other cards only have stars on the imagery. I don’t mean to be nitpicky  about these omissions, but if you’re going to go through the trouble of trying to embed such symbols—and explain their importance—then they should be present in the cards. Otherwise, you may confuse and frustrate the reader, especially those new to Tarot and/or ancient symbolism. 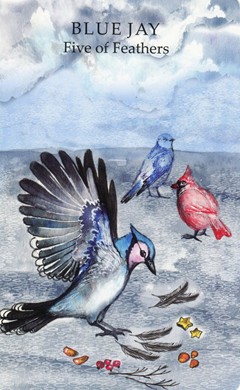 Borderless cards awash in pretty pastels, the art of the Animal Wisdom Tarot reflects a very loose, almost impressionistic watercolor style, so some animals—for example, the 5 of Feathers (Blue Jay)—are far from anatomically correct. However, these animal denizens appear friendly and knowing, making these cards perfect for kids or those more comfortable with gentle imagery.
The other day, my 14-year-old son and I were sitting at the table. I was going through the Animal Wisdom Tarot deck and he began looking through them, too. Our orange tabby cat, Stewart, was on his lap, giving us curious glances…so I suggested we give Stewart a Tarot reading. (Hey, he’s an animal…why not?)
After thoroughly shuffling the cards, my son picked a card for Stewart. Because the illustrations on this deck don’t really provide much intuitive information on their own, he began reading what the companion book said about the card. He marveled that the card actually reflected what HE was experiencing! “The cards must pick up on the energy of the one selecting the cards!” he exclaimed.


So while Mr. Stewart did not get a Tarot reading that day, my son did.
And then we did a reading for me. Again, it was so accurate that my son said “Oh my gosh, that sounds just LIKE you!”
A very accurate deck, as you can see.
But, as I said, it’s not an easy deck to read at face value. You’ll likely have to rely on Ms. Brunke’s engaging insights into each animal and its corresponding card to get the most out of a reading. 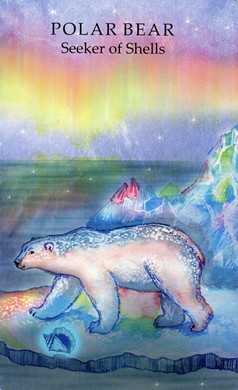 At 95-pages, the full-color companion book depicts a reproduction of each card, its traditional Tarot designation, Keynote (Majors), Theme (Minors) or Quality (Courts)—just names for keywords, really—and a brief message. There’s also four spreads: the usual 3-card spread, Celtic Cross and two new fantastic layouts: the 6-card Bear Pause Spread and the 8-card Honeybee Lovers Spread.
The Bear Pause Spread was so freakin’ insightful, I SO wish Ms. Brunke had included more layouts!
Unfortunately, I stumbled on some typos in the companion book—“to being” on page 17 (which I assume she meant, “to begin”) and the Six of Fossils on page 74 (it’s supposed to be the Seven of Fossils) are just two of them. Again, I don’t mean to be nitpicky, but animal wisdom by itself can be quite overwhelming to beginners, let alone when combined with the complexity of Tarot. Thus, I highly esteem clarity and accuracy in a companion book (although I realize that some mistakes may very well be no fault of the author, but of the editors, proofreaders or publisher).
The Animal Wisdom Tarot is a wonderful deck for learning about a myriad of fauna. By integrating the deep wisdom of various animals with the structure of Tarot, a doubly powerful tool emerges. I don’t feel this is a deck you can use right out of the box—perhaps if keywords were placed on the cards, you could—but Brunke is enough of an engaging, informative tour guide that most people will remember her associations after one read.
If you love animals and would like to see how their wisdom meshes with the Tarot—and find the card illustrations appealing—I think you’ll greatly enjoy this deck and book set.

To see 17 additional card images from this deck, click here.