Hope After Faith: An Ex-Pastor's Journey from Belief to Atheism

“I was becoming painfully aware that I didn’t understand the Bible, the bedrock that everything in my life was built upon. I had investigated concepts like eternal punishment but I had never broached the idea that the Bible might contradict itself or promulgate ideas that I didn’t believe in… It was like a tornado had torn down every structure I inherited and built upon. I was not even standing on a slab but on bare dirt.” – From Hope After Faith 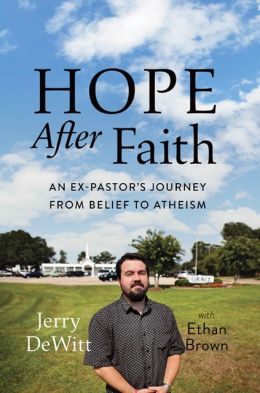 In his fascinating spiritual memoir Hope After Faith, ex-pastor Jerry DeWitt (along with co-writer Ethan Brown) shares his tumultuous experience as a devout Pentecostal, hungry to be close to God and see the fires of revival sweep the South, and the crash/burn that resulted from witnessing too many unanswered prayers, ineffective ministrations, clergy hypocrisy, denominational infighting and Biblical contradictions.

From a salvation experience in the lush amphitheater of Jimmy Swaggart’s Family Worship Center in its heyday to tiny, destitute churches of Louisiana, the author details the dizzying heights of frenzied revivals—and the crushing lows of personal rejection (after getting saved, his grandmother asked if he spoke in tongues—and because he didn’t, his experience was negated), extreme poverty, dashed expectations and persistent doctrinal doubts.

Jerry’s countless attempts to survive as a traveling evangelist—including trying to “sell” himself to pastors to get a booking, dealing with legalistic ministers with bizarre beliefs and attempting to reconcile the various doctrinal differences between Pentecostals—is heartbreaking to read. As a former Pentecostal minister myself, so much of Hope After Faith mirrored my own experiences—so while I couldn’t put this memoir down, it stirred up some uncomfortable memories.

The first half of the book focuses on the numerous personalities within various churches and the author’s own family—pastors, congregants, cousins, aunts, former schoolteachers, bosses, evangelists, etc.—and how each affected Jerry’s personal doctrine, self-esteem and desire for fierce devotion to God. There’s so many names, not to mention doctrinal minutia, that some readers may feel overwhelmed with details at first.

But stay with the book.

Once Hope After Faith reaches about the halfway mark, I realized why all this information was necessary: to show that Jerry was, indeed, a kind-hearted, servant of humanity who “searched the scriptures” just as the Bible admonished, sacrificed enormously (as did his longsuffering wife, Kelli) and strove for purity.

Except, when Jerry started to investigate the Bible, itself, instead of swallowing the Pentecostal doctrine du jour—going so far to delve into church history and the work of Joseph Campbell—the rational, sensible answers that surfaced shattered his world.

Jerry realized that he was an atheist.

The last half of Hope After Faith chronicles Jerry’s anxiety and confusion as he continues to feel the magnetic pull of evangelism and desire to minister to humanity’s suffering, yet realizes that that he no longer adheres to supernaturalism (the intervention of God or supreme beings in the affairs of men, especially in the form of healing, prophecy and miracles) nor believes the tenants he once cherished.

It then dawns on the author that ministers are “meaning machines”, required to provide a sense and purpose to suffering humanity. When Jerry experiences a series of deaths—including a preacher’s callous attempts to explain it (a beloved, smart teenage boy was killed in a car accident because, had he lived, he would have been tempted by worldliness and eventually lose his soul)—and advises a man to get surgery (he dies the next day, leaving the author wracked with guilt), the final, tenuous connection to Christianity (and its trappings) evaporates.

But what happens when a Pentecostal minister attends a Freethought Convention, gets his picture snapped with prominent atheist author Richard Dawkins and uploads it to Facebook?

Jerry thought he was actually going to get away with atheism in his hometown of DeRidder, Louisiana—but if you know anything about vengeful, shunning Pentecostals…

If you want to know what happens—and believe me, Hope After Faith is one helluva ride—then you must read this book. It’s one of the most engrossing memoirs I’ve ever read (and I’m very picky). If you’re a believer, it will have you reassessing what it means to be an atheist, especially a humanistic one (silly me, I assumed you had to be offensively pugilistic like Christopher Hitchens, Penn Jillette or Ricky Gervais to be one!).

And yes, if you have an open mind, your faith will be challenged…as it should be. Because as Jerry said at a NOSHA (New Orleans Secular Humanist Convention) banquet in October 2011: