Happy Summer Solstice! (For my readers Down Under, Happy Winter Solstice!)

Either way, I have a pic I think you'll enjoy: 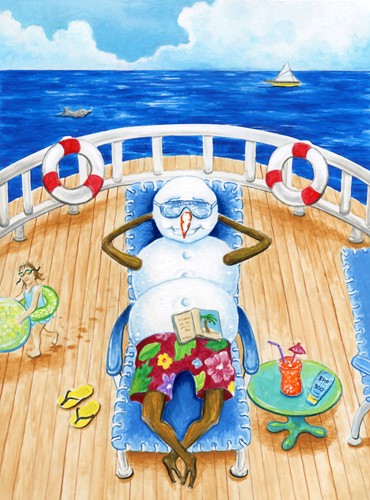 This is the Snowland Deck's version of the 8 of Cups (8 Emoting). In the Rider-Waite-Smith version of this card, a figure is walking away from eight perfectly good goblets--perhaps signifying leaving behind something that's whole or working just fine (unlike the 6 of Swords, which is leaving behind a difficult situation).

In our version, the snowman is leaving behind any worries or obligations he may have back home. (Who knows? Maybe he's a happy chap that doesn't even have those in his "other life").

Notice there's no buttons in his body? There's a phrase "buttoned up", or "buttoned down", which means conservative, carefully planned, conventional, supervised. Ron chose to eliminate the usual coal buttons altogether, signifying quite the opposite: relaxed,unconventional, unplanned and free to do as he pleases.

But irresponsible he is not. Notice that sunscreen with a SP of 500 on the table?

What cracks me up most about this card is the snowman's stick feet; fortunately, those sandals will fit him perfectly!

Hope you have a great first day of summer--and remember that sunscreen!