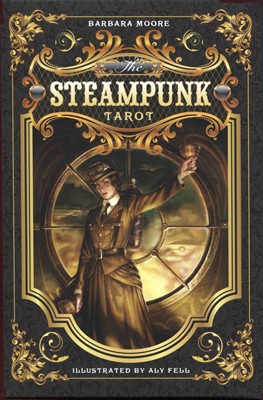 “Steampunk, and any genre or subculture, reflects our current struggles and concerns as a culture. The genre of steampunk itself also shares some fundamental characteristics with tarot. In tarot, many of the cards explore the relationship between opposing energies and the desirability of balancing opposites within ourselves. Some cards even hint at serious issues that occur when our lives are not in balance. This search for balance is part of the spiritual quest that the cards reveal.” – From the Steampunk Tarot Manual by Barbara Moore

I bought the Steampunk Tarot by Barbara Moore and illustrated by Aly Fell when it first came out. Although I found the images attractive, I just didn’t feel drawn to work with it. Like some decks I own, I put it on the shelf, believing that someday I would pick it up again when the time was right.
That time is now.
There is so much to love about the Steampunk Tarot. I especially appreciate the complete lack of nudity in this deck, as well as the respect that it shows to women. There are no bodacious babes with boobs spilling out of tight corsets nor naked platinum blonde bimbos serving only as fantasy objects. In fact, all the Pages and Knights are—drum roll—female! How’s that for turning Tarot on its head? 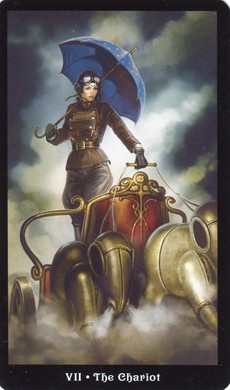 Guess who else is portrayed as female? The Chariot, Death and Judgement. Hell yeah!
How refreshing to see strong, competent, independent women working right alongside men as mechanics, pilots, drivers, builders, bartenders and fighters in this steampunk milieu. Don’t get me wrong—women also show up in the form of healers, fortunetellers, lovers, socialites, hostesses—the usual suspects—but the majority of depicted roles are atypical for Tarot, and a welcome update.
As you’d expect with a steampunk theme, earth tones permeate this deck—sepia, olive, mustard, ecru, etc.—but there are lovely punches of color throughout (blue electric sparks, rich violet fabrics, glowing purple lemniscates and so on).
In the Steampunk Tarot, the Minor Arcana suits and Court Card designations follow Rider-Waite-Smith designations—Cups, Wands, Swords and Pentacles for the former, with Page, Knight, Queen and King for the former. Featuring the four suit symbols among gears and cogs, the card backing is non-reversible.
The 294-page companion book does a nice job of providing basic Tarot knowledge—deck structure, how to perform a reading, numerology—with each card description a creative narrative describing the image and how it may apply to person situations. These make for a highly enjoyable read, and truly add to a card’s import and possible interpretation. Also, a brief core meaning is provided, taken straight from Moore’s beginner Tarot book.

Moore doesn’t address reversed cards in the Steampunk Tarot because she says they complicate things too much for her style of reading. 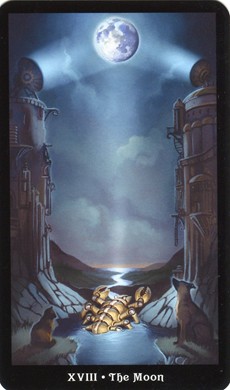 One section in the book, however, causes me great concern. On page 22, Moore list some questions would be considered valid questions for a reading by some readers. Among them:
• Is my husband cheating on me?
• Do I have cancer? Will the test come back positive?
• When will I get married?
• Will I ever have a baby?
• Should I marry Susan?
• Why isn’t Mark returning my calls?
• Is the spirit communicating with me through my dreams benevolent or evil? [What an assumption...that evil spirits actually exist!]
She’s absolutely right that these types of questions would only be considered valid by SOME readers. Many readers, like me, would consider these types of calls irresponsible at best and illegal at worst. In fact, Moore doesn’t even discuss ethics in her companion book, not even after the list of eleven dubious questions. She just leaves them there as if they’re good examples of questions to ask Tarot (they’re not).
Unless a reader is a doctor, it is illegal to read for questions like “Do I have cancer?” not to mention highly irresponsible. Asking if a spouse is cheating or trying to find out information about people not present at the reading is psychic voyeurism.
Psychological readers interested in the self-empowerment of their clients won’t even answer yes/no questions (they can be easily answered by a coin toss, after all), nor would they answer “should” questions (because they don’t seek to direct a client’s life). Or, the reader would re-word such question. Thus, most of the sample questions Moore provides is only valid for fortuneteller ilk. 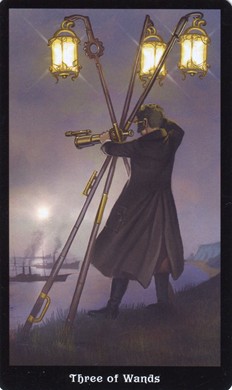 In my opinion, Moore should have included tons of qualifiers in this section, provided (instead) sophisticated questions encouraging self-reliance or (better yet) scrapped this section altogether.
I would have loved to seen more spreads (card layouts) in the Steampunk Tarot Manual—and given that Moore wrote a book about spread creation, you think this would be doable—but, alas, all we get are the usual 3-card spreads and two other layouts that are actually truncated versions of the Celtic Cross. One addendum spread called “The Difference Engine” provides convoluted machinations like taking the outcome card from a previous spread and putting it in the center, reducing it numerologically, drawing that number of cards to put in four separate piles around the central card and then interpreting the piles as alternate possibilities—confusing, unhelpful and mere mental masturbation.
The spreads in another Steampunk Tarot (by John and Caitlin Matthews, illustrated by Wil Kinghan) are complex, but extremely insightful and profound—and while I can wish THIS Steampunk Tarot by Moore had those kind of spreads, I understand that Moore isn’t the Matthews…
Minor reservations about the companion book aside, the Steampunk Tarot is an extraordinarily beautiful deck illustrated by Aly Fell. His artistic renderings of Tarot archetypes, personas and steampunk accoutrements are among the best on the market right now. I’m using this deck on a regular basis, and find it to be clear, accurate and chatty. If you’re interested in steampunk mythos, I think you’ll find this a lively, relevant, usable deck.


To see 17 more images from this deck, click here.