Symbols in The Empress Tarot Card

In his book The Pictorial Key to Tarot, Arthur Edward Waite says that The Empress is:

“A stately figure, seated, having rich vestments and royal aspect, as of a daughter of heaven and earth. Her diadem is of twelve stars, gathered in a cluster. The symbol of Venus is on the shield which rests near her. A field of corn is ripening in front of her, and beyond there is a fall of water. The scepter which she bears is surmounted by the globe of this world. She is the inferior Garden of Eden, the Earthly Paradise, all that is symbolized by the visible house of man. She is not Regina coeli, but she is still refugium peccatorum, the fruitful mother of thousands.” 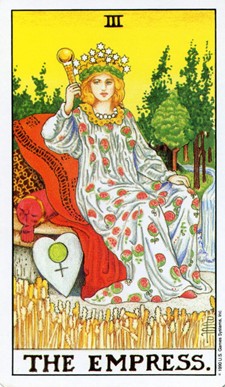 Both the High Priestess and Empress wear crowns. Paul Foster Case asserts that is no fundamental difference between the two, “but the High Priestess symbolizes the virgin state of the cosmic subconsciousness, as it is in itself, whereas the Empress typifies the productive, generating activities of the same subconsciousness, after it has been impregnated by seed-ideas originating at the self-conscious level represented by The Magician.” (The Tarot: A Key to the Wisdom of the Ages). 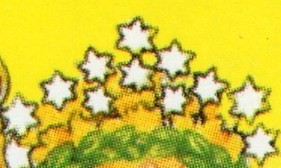 Diadem: The Empress wears a crown of 12 stars. Crowns signify rulership and authority, a “marriage ring” between heaven and earth. The Empress rules over fertility and reproduction; it is under her rule that all manner of flora and fauna proliferate unchecked.

12 Stars: In their book The Secret Language of Tarot, Ruth Ann and Wald Amberstone call this crown the “Diadem of the Zodiac”. In his book The Tarot: A Key to the Wisdom of the Ages, Paul Foster Case notes that the 12 stars not only connects to the zodiac, but also the 12 months in a year and the 12 hours on a clock. On the shape of the stars, he says, “The stars are six-pointed, or hexagrams, to show that she has dominion over the laws of the Macrocosm, or great world.”

White Robe with Numerous Fruit: White symbolizes the “blank slate” of purity. For Buddhists, white is associated with the lotus flower, which is a symbol of light, purity and illumination (Signs & Symbols). Some theorize that the fruits on the robe are pomegranates sliced in half, which would connect to Waite’s comment about The Empress being “the fruitful mother of thousands”. As we learned in the High Priestess eBook, in Phrygian myth, castrated Agditis became the goddess Cybele, and his the blood formed the first pomegranate tree. This ruby red fruit is also associated with Persephone, Hades and the Underworld (death, life and rebirth cycle), and thus is central to Eleusian Mysteries honoring Demeter and Persephone as the feminine source and symbolic of the continuity of life. Note that the fruit on the robe of the Empress echoes the glyph for Venus, found on the heart-shaped shield.

Scepter: Scepters are phallic, masculine symbols of authority and sovereign power. However, scepter of The Empress features an orb at the top, which is a feminine symbol (although a sphere sometimes symbolizes Heaven or the spiritual universe). The Empress rules, but with a different energy than the organizing and limiting approach of The Emperor.

Red Cushions: Red is the color of passion, sensuality and love. Some Tarot enthusiasts connected The Empress with feminine sexuality (unlike the virginal High Priestess). And yet, red is also associated with war, aggression, blood and warning. Cushions imply comfort and sensuality, so it could be argued that red cushions imply the application of “feminine wiles” in the attempt to neutralize or influence powerful males (e.g. Delilah).

Field of Wheat: The lush field of wheat in the foreground further implies abundance and fruitfulness. Paul Foster Case says of The Empress, “The apparent multiplication of images is really the splitting-up of the seed-ideas into manifold presentations. This is symbolized by the multiplication of the original seed in the wheat-ears at her feet.”

Heart-Shaped Shield with Venus Symbol: Hearts symbolize love and romance, while shields offer protection. Venus is the Roman version of the Greek goddess of love, sexuality and beauty, Aphrodite, and the “mirror glyph” is a universal symbol of femaleness. In her fascinating book The Woman’s Dictionary of Symbols and Sacred Objects, Barbara Walker writes of Venus: “It also denoted the day sacred to her, Friday (Latin dies veneris), in pagan tradition the day of eating fish—which was thought to be an aphrodisiac food—in anticipation of sexual rites honoring the Goddess. The practice was copied by Christians, who changed its meaning. “Veneration” used to mean the worship of Venus because the Romans regarded her as one of the most sacred of all deities. The Latin word for “grace”, venia, meant the Goddess’ favor.”

Possible Pregnancy: Some theorize that The Empress is pregnant, although we can’t be sure from the image alone. If it’s true, then this connects further to the themes of fecundity and fertility.

Would you like to know more about The Empress? Get the latest installment in my Tarot Explorations Card-by-Card series, the 4,500+ word The Empress. It includes:

• Investigating The Empress with the 7 Clue Method

• Empress Spread with placements and image (created just for this eBook!)

• Essay on The Empress and Emperor in the Garden

• Bonus Empress and Emperor in the Garden Spread

• Essay on the Mother Archetype

Case, Paul Foster. The Tarot: A Key to the Wisdom of the Ages. New York, New York: Jeremy P. Tarcher/Penguin, 2006.