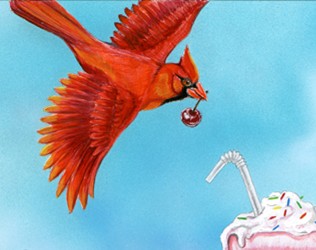 For the Snowland Tarot version of the Ace of Cups, Ron suggested a red bird delivering a cherry to place atop the milkshake.

“A Cardinal!”, I exclaimed. After all, the ever-present Northern Cardinal dots the landscape in our home state of Pennsylvania, looking particularly striking against the snow.

He agreed, and sketching the Ace Emoting (aka Ace of Cups) card commenced.

Now, in the Rider-Waite-Smith version of this card (and many Rider-Waite inspired decks—which is the majority of the Tarot market), a white dove (representing the Holy Spirit) delivers a wafer (Eucharist) to an overflowing cup. This cup has an upside down M on it, supposedly connecting it to Mary, the mother of Jesus.

Thus, there’s a definite connection to Christianity in many renderings of the Ace of Cups or, at the very least, “communion with the Divine” (however one may experience that).

As I was researching the Cardinal, I was fascinated to discover that this delightful red bird also has connections to Christianity (or Spirit, depending on how you want to look at it). In fact, that’s how the Cardinal got its name: the scarlet plumage resembled the bright red robes of cardinals in the Roman Catholic Church.

In the Tarot, the Cups suit is one of two feminine (receptive) suits (the other being the Coins suit). Connected to the element of Water, the Cups suit correlates to emotions, relationships, intimacy, love, compassion, spiritual devotion and intuitive impressions.

In his wonderful book Animal Speak, author Ted Andrews says this of the Cardinal:

“The cardinal has a loud and clear whistle. Whistles are often reminders to listen closely—to pay attention to what is blowing on the winds. In the case of the cardinal, the female joins in on the whistling, which is unusual among birds. This reflects that we should be listening to the inner voice (the feminine) more closely for our own health and well-being. Since most female birds are quiet and camouflaged, a cardinal totem almost always reflect a need to assert the feminine aspects of creativity and intuition more strongly.” 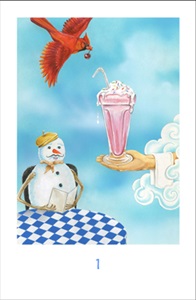 Wow! Talk about dovetailing (or would that be cardinaltailing?) nicely with the Cups suit! And, the Aces in the Tarot are much like the number 1—heralding beginnings, new opportunities and seeds.

So the Ace of Cups version of the Snowland Deck reinforces (and expands) upon the traditional meaning of this card with the Cardinal symbol, reminding us to be receptive to love, spiritual replenishment, intimacy, emotional currents, grace, positive vibes and goodness.

Cardinal with cherry (and Ace Emoting) painted by Ron Boyer for our Snowland Deck deck. The Ace of Cups on the left is from the Universal Waite Tarot. To get your very own Snowland Deck, please visit SnowlandDeck.com.