I'm absolutely thrilled that Janet Hinkel, creator of the Tarot of Delphi, has crafted this fascinating guest post on Medea and her connection to the archetypal Magician for your reading pleasure. 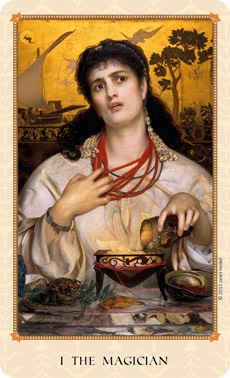 In the Tarot of Delphi, the Magician is Medea, the infamous, barbarian witch-princess. A “Tarot bitch.” A WTF? card.
In the traditional rendering of the Tarot, the Magician is male, the High Priestess female, followed by the female Empress and male Emperor. There is a balance that many consider necessary. The Tarot of Delphi reminds us that we all have masculine and feminine qualities, and how we express these characteristics is not defined by gender.
Medea is, in fact, a prototypical (if misunderstood) capital-M Masculine force, the consummate Magician. She exhibits all the characteristics of a Classical Greek hero like Odysseus: well-traveled, cunning, favored by the gods. And she aces Janet's Permutations of the Magician Archetype qualifications: shaman, communicator, provocateur, illusionist.
As a shaman, Medea is a talented herbalist, potion-maker and prophetess. She revives the dead, cures the mad, and makes the infertile virile. As the Magician in the Tarot of Delphi, she is casting a spell, accouterments arranged before her. A red string tied to a flaming cauldron encircles a three-eyed toad, a fruiting laurel sprig, a shell of blood and a mummified bat.

Medea commands the elements of magic as adroitly as she directs people. As a communicator, she advised Jason and the Argonauts, orchestrating their success. She tells Jason how to acquire the Golden Fleece (while also providing the potions), outrun her father’s pursuing ships, and even regain his throne. On the Magician card, her victories are displayed behind her: the ship Argo, the Golden Fleece, the hide and horns of fire-breathing ox. 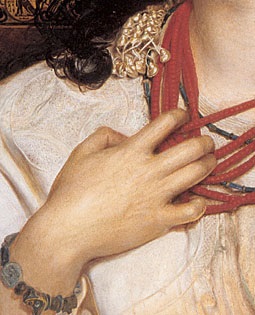 A brilliant strategist and fearless adventurer, Medea makes kings and breaks them, making her an accomplished provocateur. When the Argonauts cannot pass a monster, keeping them from lifesaving water, she kills it. When a foreign king threatens to send her back to her father, she arranges her freedom. When the Argonauts cannot muscle their way to triumph, she singlehandedly procures success. When Jason cannot retake his kingdom, Medea strolls into the palace alone, handles the matter, then signals to Jason that he may safely return.
Throughout her adventures, Medea displays her skills as an illusionist. To escape her father, she tricks an apprehensive king into protecting her interests over her father’s, quite unconventional in the ancient world. To retake Jason’s throne, now her husband, she tricks the princesses into killing their own father, the usurping king, by making them believe she can make the old young again.

In this portrait of Medea, there is tension in her hands, a distant look in her eyes. The intensity of her spellcasting, her concentration and absorption reveal the Magician’s recipe for ambition. Medea sees something “out there,” and by her magic she is bringing it closer. This is what people who shape the world do. This is what Magicians do. They create opportunity. They draw the dream closer, so they can capture it at precisely the right moment.
Medea did not blow in the winds, carried from shore to shore and lover to lover. She saw, she desired, she strived, she attained. Repeatedly and confidently she walked down the more difficult road. She did not take the easy way. She did not go quietly when dismissed. She did not resign herself to her fate. Like anyone who makes a mark on the world, she was an extraordinary creator of her own fate.
The  Tarot of Delphi is a fine art deck curated by Janet D.H. Hinkel and illustrated with Neoclassical Victorian artworks from 1838 to 1913. The painting illustrating The Magician is “Medea” (1868) by Frederick Sandys. A 2-minute video and more information about the deck are available on Kickstarter at this link.