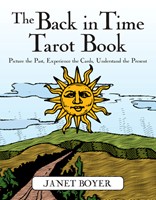 My Back in Time (BIT) Tarot Method (as featured in my 2008 book Back in Time Tarot, published by Hampton Roads) shows how anyone can use--and learn--Tarot just by associating the cards with memories, songs, historical events, stories, fairytales, TV shows and more. Here's the chapter on Songs from the 80s--complete with videos to go along...and questions for further exploration.

Arguably one of the best eras for music, the eighties were a time of big hair, fluorescent colors, leg warmers, upturned collars, stonewashed jeans, and banana hairclips. Madonna began her reign as a pop goddess; synthesizers replaced disco beats, and glam metal found dudes raiding their mom’s makeup bag. Surprisingly, some successful acts from the 1980s are still around making music, but they’re sporting a lot less hair and mascara.

Wheel of Fortune: “Changes” by Yes - There’s only one constant in life, and that is change. The capricious Wheel seems to dump fortune in one person’s lap, while robbing another blind. Some people believe that a petty God lives upstairs, ready to deliver a toasty lightening bolt to those who are bad and luxurious rewards to those who are good. Others believe it is the Law of Attraction serving up whatever a person happens to be “vibrating.” One thing is for sure: the Wheel brings frustration and delight, luck and disaster. How you interpret the source of the cycles is entirely up to you.

The Emperor: “Everybody Wants to Rule the World” by Tears for Fears - Bureaucracy, gridlock, and insane pressure. While many of us don’t want to rule the entire world like an emperor, we certainly want to rule ours. What happens when the energy of rules, boundaries, and calling the shots butts up against another’s desire to do the same? Compromise would be one solution, but you’ll have to look to another card for that.

Seven of Cups: “Sweet Dreams (Are Made of This)” by the Eurythmics - “I’ve traveled the world and the seven seas—everybody’s looking for something.”  Because of all the intriguing choices offered in each of the seven cups in the imagery, I consider the Seven of Cups to be the “life is a buffet” card. Fame, fortune, identity, knowledge, truth, achievement, love, peace, meaning—yes, just about everyone is chasing after something. Every dream, even crazy ones, begins with a healthy dose of imagination, so is it possible that believing is a precursor to seeing?

Two of Swords: “I Know There’s Something Going On” by Frida - One-fourth of the seventies group ABBA, the attractive red-headed Swede, aided by tons of reverb, sang this haunting refrain. More often than not, many individuals do, indeed, know when “something” is going on because they’re equipped with gut feelings. However, like the blindfolded lady in the Two of Swords, they choose to “see no evil” (or, better yet, refuse to address it), so they go on pretending that nothing is going on.

Ace of Cups: “Higher Love” by Steve Winwood. When I think of the Lovers, arranged marriages and fitting partnerships come to mind. The Two of Cups, for me, is the deep connection of soul mates and close friends. What exactly is a “higher love” than that? Well, I see the Ace of Cups as a pure heart, communion with the Divine, and unconditional love.

Five of Pentacles: “Jeopardy” by the Greg Kihn Band - Admittedly, “Weird Al” Yankovic’s spoof of this song has tainted my memory a bit (“I was on Jeopardy . . . baby”), but when lead singer Kihn asks, “Where were you when I needed you?” I think of the Five of Pentacles. I can totally see the two huddling figures in the foreground as individuals who helped others in their time of need, only to be abandoned when they were in jeopardy.

Five of Cups: “Tainted Love” by Soft Cell. Speaking of tainted, I just had to include my absolute favorite song from the eighties! “Take my tears and that’s not nearly alllll, tainted love . . .” Although the tossing, turning, and not sleeping at night would be more akin to Nine of Swords, I’ve always gotten a weird vibe from the Five of Cups. The figure cloaked in black—what’s going on behind the robe? I swear, every time I look at the Universal Waite version of this card, I think I see some peeking. “Boo hoo! My feelings are hurt!” Call me cynical, but I suspect they’re crocodile tears, and if that’s the case, there’s probably a manipulator under that cloak. “Once I ran to you, now I run from you.” Indeed!

Six of Cups: “Don’t You (Forget about Me)” by Simple Minds. In one Tarot tradition, the Six of Cups is associated with the sun in Scorpio. One thing is certain about Scorpios, especially low-level ones: they never forget—especially injury and slights. However, this lovely croon tune refers to looking to the past with fondness and longing, another meaning often associated with this card. “Hey, hey, hey, hey . . .”

Ten of Pentacles:  “Our House” by Madness - “Mother wearing her Sunday best”—never a good sign in song or movies. Oh, it sounds so 1950s perfect, but behind closed doors, there’s probably spousal abuse, child neglect, Internet-porn addiction, and alcoholism. But golly, I bet the linoleum floor sparkles! If the Ten of Cups is the truly cohesive, loving family, then the Ten of Pentacles may very well be the ones who pretend to be such because, for them, appearances are everything.

Four of Cups: “I Don’t Care Anymore” by Phil Collins - Whether jaded by experience or disappointed by expectations, the bored-looking figure in the Universal Waite version of this card seems to exude an “I just don’t care” attitude. Like the lyrics of this song, he just sits there “and bides his time.” But what is it that he’s waiting for? A hand emerges from the cloud, bearing a cup—what might that represent to the central figure in this card? We can only speculate, but his obstinate body language seems to indicate that he needs to deal with whatever is in those three cups before him in order to be open to the offered chalice floating in the air.

Temperance: “Send Me an Angel” by Real Life - I admit it: I made this choice because I saw it in a dream. No, I’m totally serious. I woke up one day, the dream world trailing ether as it went back from whence it came. In my head, I heard this song and saw the Universal Waite version of Temperance. The lead singer pleads, “Don’t give up . . . don’t give up . . . I’ve never been lucky in love.” Well, I believe in healing and hope, so let’s hope that angel in the card brings some measure of peace to the troubled waters of lonely hearts everywhere.

The Devil: “Witch Hunt” by RUSH - “Quick to judge, quick to anger, slow to understand. Ignorance and prejudice, as we walk hand in hand.” The Devil can be an ignorant son of a bitch, quick to call “evil” what he doesn’t know or understand. Perhaps if he’d go beyond the surface with his eye (the Hebrew word ayin, meaning “eye,”is associated with this card in Qabalistic tradition), he’d realize that we’re far more similar at core than different.

Songs convey stories, emotional content, concepts, and messages, which make them perfect catalysts for stimulating memories and intuition. Symbols are shortcuts, and like the Tarot, songs are often full of them. Thus, both can deliver a wide range of information for those who are paying attention.

For those born after 1985, “totally” was an oft-used term originating with the “Valley girls” on the left coast, but it eventually worked through the entire United States. (Don’t believe me? Look up the lyrics of the song “Valley Girl” by Frank and Moon Unit Zappa. Yes, Moon Unit is her real name. If that’s not bad enough, she has a brother named Dweezil!) Like, anyway, I’m still not done with the word “totally,” so please excuse the multiple uses in this particular BIT Snapshot. I’m not trying to gag you with a spoon, honestly.

-- Janet (P.S. Back in Time Tarot was voted one of the Top 10 Best Spirituality Books of 2008 by OneSpirit Book Club--along side Deepak Chopra and other Self-Help luminaries.)