10 Questions for the Tarot of the Apocalypse Trio Magdalena: Let me speak for our trio please:

What we eat is basically cottage cheese with brown bread and coffee. But on weekends absolutely biscuits “Jacob’s 7 angels jam dodgers” and “Turbo twirls” baked in a clay furnance as described in our book... ha ha ha.

Book you’d like to give everyone (or wish they would read)?

The number one for us is the novel Master and Margharita by Mikhail Bulhakow.

What makes you laugh?

We laugh about our own old jokes which can be understood by us only; otherwise, when people think our deck is Christian and we are a very religious people.

Song that never gets old:

The song “What a Wonderful World” by Louis Armstrong.

Would you rather be hot or cold?

No desert please. We love mountain climbing when not too high, ha ha ha.

Światosław is gold. Magdalena is blue and Robert is black (he always draws in black).

From the movie “Amadeus” by Milos Forman:

Emanuel Schikaneder: Look, I asked you if we could start rehearsals next week and you said yes.

Mozart: Well, we can.

Emanuel Schikaneder : So let me see it. Where is it?

[Salieri is wheelchaired through the insane asylum]

Last thing you splurged on?

On getting our deck printed, which the publisher feared as the devil in need of holy water! 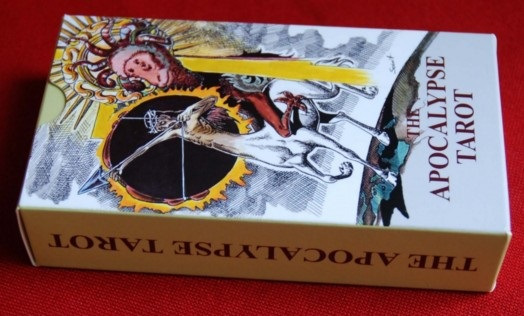 Światosław Nowicki (nickname “Master”) is a Polish philosopher, astrologer and translator, expert on the German philosopher G.F. Hegel. He translated into Polish seven thick volumes of Hegel (almost 1,7 million words). He has also published several translations of philosophical literature from Latin, French and German articles about Hegel in Polish scientific journals. He translated 2013 the Six Theosophic Points by Jacob Boehme into Polish. Co-author of the astrology book  "The Zodiac Cycles”. He knows so much about so many things - he knows music theory and the music of the spheres, astrology, astronomy, philosophy, the esoteric. He personally thought of and sketched 78 drawings for the 78 cards of the blasphemous tarot The Tarot of the Apocalypse, self-published in Poland in 2013 (www.swiatoslawnowicki.com). Co-author with Magdalena Walulik of the book “The Tarot of the Apocalypse. Magical love story of Master and Magdalene to the glory of the angel” (http://www.swiatoslawnowicki.com/en/?en_the-book,33). He lives in Warsaw, Poland with Magdalena.

His wife. German translator and painter (www.tarotapokalipsy.com). Co-author of the book “The Tarot of the Apocalypse. Magical love story of Master and Magdalene to the glory of the angel”. She has promised the Master that she will do everything for his deck to become the most famous tarot in the world and then she made sure that he designed the cards just as she wanted them to be. She has been dreaming since 2002 unique dreams (about 500), which she describes on her blog (http://www.tarotapokalipsy.com/en/warsaw-dreambook).

The author of the drawings designed by Światosław Nowicki. The youngest of the three, a draughtsman and visionary who lives in grotty Lublin in Eastern Poland. Currently, Robert is working on his own project: illustrations to the poems of Sylvia Plath. 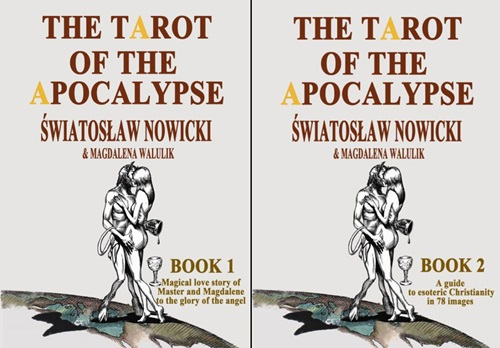