I was a big fan of Philip Seymour Hoffman's acting.

So much so, I included two of his acting roles in my book on upside down Tarot cards, Tarot in Reverse. In his memory, here are the brief excerpts: 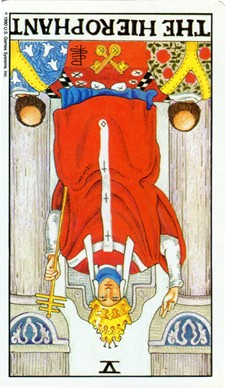 One of the most profound accounts of the The Hierophant reversed occurs in the memoir The Dance of the Dissident Daughter by Sue Monk Kidd. Living a conventionally religious life with a successful career as a Christian author, Kidd began to question what it meant to be a woman—in church, within her family, and among society. Her soul-searching found her clashing with patriarchy and awakening to the divine feminine, fundamentally changing her view of God and her place in the world. In darker expressions of The Hierophant reversed, we find examples of famous ministers who proclaimed the need for purity and righteousness behind their pounded pulpits, only to find out that these married men were sexually involved with prostitutes, secretaries and masseuses. A fascinating study of The Hierophant reversed occurs in the movie Doubt starring Meryl Streep and Philip Seymour Hoffman. This film examines religious obligation, propriety, tradition, progressiveness, the quest for truth and spiritual hubris—all themes that The Hierophant wrestles with whether right side up or upside down.

Loyalty to petrified opinion never yet broke a chain or freed a human soul. – Mark Twain

Advice: If you’re lost, my map can help you find your way. Once you’re familiar with the territory of your soul, toss my map and make your own. 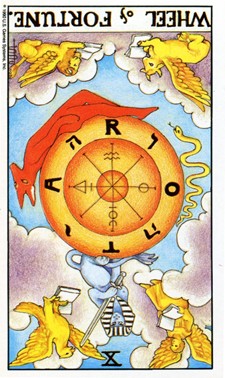 A consummate example of The Wheel of Fortune reversed occurs in the movie Owning Mahony. Another role superbly played by Phillip Seymour Hoffman, a gambler desperately tries to control his addiction, going so far to tell a friend “do not lend me any money, no matter what I say”. But the heady high of risking and hoping to win overwhelms any common sense, turning him into a desperate, pathetic compulsive gambler. Poker, slots, blackjack, roulette, 21, lottery tickets and other games of chance lure millions to spend a little in the hopes of winning big. Astrologically, Jupiter—the planet of expansion, giddiness and luck—correlates with The Wheel of Fortune card. The Wheel reversed, however, pushes individuals to “press their luck” or tangle with the one-armed bandit “just one more time”—a cycle leading to full-blown addiction and its devastating effect on finances, career, family and health. On a lighter note, the movie Groundhog Day starring Bill Murray and Andie McDowell highlights an extreme version of déjà vu when a weatherman (played by Murray) keeps reliving the same day—February 2. Sometimes, the proverbial wheel of time seems to play the same old scenarios in work, school or home—and we just want to “stop the world” so we can get off from a merry-go-round that begins to feel like a rut.

Advice: Roll with the punches, roll the bones, where it all stops, no one knows. Hang on tight, but bend in the wind, change is inevitable, so put your bets in.