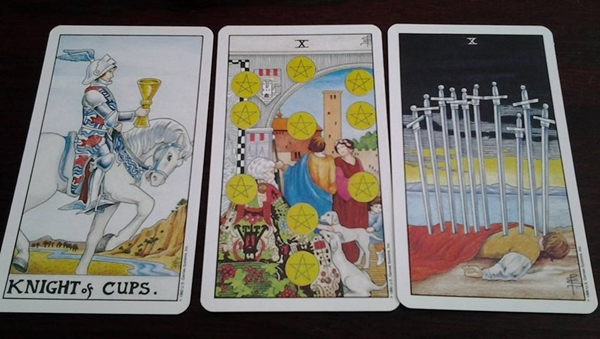 In the spread above, Sue has drawn three Tarot cards:

What could they mean? Well, my initial take includes:

Sencario One: A boyfriend (Knight of Cups) goes to a family reunion with his girlfriend (10 of Pentalces) only to have her break up with him there (10 of Swords).Scenario Two: A guy goes to propose to his girlfriend (Knight of Cups), asks her parents/family for her "hand in marriage" (10 of Pentacles) and one or more throws a fit, refusing to give the couple a blessing. Adding insult to injury, the girlfriend sides with her family, and breaks off the relationship (10 of Swords).

Some of you new to the cards may be wondering "why?". Here goes!

The Knight of Cups often indicates a "hopeless romantic", but also suggests someone who's head over heels in love OR about to "pop the question" (propose) to his girlfriend (or boyfriend).  Now, as I mention in my eBook Tarot Court Card Revealed, Knights are NOT necessarily males--just as Queens aren't necessarily females or Kings, males.  However, this archetype is usually portrayed by males pursuing (or deeply in love with) females (or an ideal, such as Don Quixote), which is why I deemed the Knight a male in both scenarios.

WRONG-O! As I mention in both my Tarot Detective eBook and my Snowland Deck Companion, all card in the Tarot are on spectrum. This continuum ranges from helpful to detrimental for each card in the Tarot. Yes, every one! The 10 of Pentacles is no exception. Below is a video I made talking about the "negative" spectrum of this card.

Now, the 10 of Swords in Rider-Waite-Smith style decks looks pretty bad, right? It, too, is on a continuum (and can have beneficial import given the question/surrounding cards) BUT, in this case, it doesn't look too good. Based on the visuals alone, it shows a man "stabbed in the back", or "gutted" or even "betrayed". This is why I ascribed a public humiliation and/or break up with the Knight of Cups in a familial surrounding (10 of Pentacles).

However, what if this spread was drawn to answer THIS question:

I'm drawn to a creative endeavor. How will it pan out?

Then, I'd interpret this 3-card spread something like this:

You start out enamored with the creative idea (Knight of Cups), and receive positive reinforcement from your family (or "substitute" family, e.g. writer's group or artist collective). In fact, you may even receive some financial assistance from them or a grant (10 of Pentacles). But something happens that causes you to feel betrayed or severely anxious (10 of Swords).

Now, I'd have to draw more cards to reveal the exact nature of the 10 of Swords because it could mean:

The 10s of any suit are saturated. As such, they're almost on the "tipping point" of something entirely different. Think of them as "ready to burst". This can be beneficial or determimental, but when it comes to the masculine suits of Wands and Swords--and, in some cases, the feminine suit of Pentacles--the result is ususally undesirable.

So, dear readers, how would you interepret these three cards? I'd love to hear from you in the comments below! (And huge thanks to Sue Cowie for allowing me to use both her image and her example).