I've not jumped into the Lenormand craze because I detest leaping onto bandwagons. Yet, I wondered what all the bruhaha was about, so I purchased two Lenormand decks to fill me in: the Gilded Reverie Lenormand, and the lovely (and well-researched) Enchanted Lenormand by Caitlin Matthews.

However, two glaring things caused me to not bond with this deck:

1. The card designation error on the Dog card (#18, which should be the 10 of Hearts, not the 10 of Spades). This results in TWO 10 of Spades cards in this deck (the other one being the correct Ship card--#3). Sloppy editing on behalf of U.S. Games Systems, the publisher? (Wouldn't surprise me, since I once had a deck from this company that featured a misspelling of the card's TITLE--Clytemnestra). 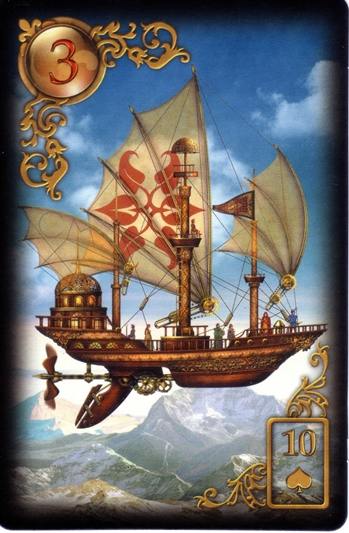 2. The digital illustrator's continued use of putting his CM initials, prominently, in all the images (as he does with ALL his decks). We, the users, are constantly reminded of this prima donna's "look at me!" intrusion into the images (which doesn't make for profound or indepth readings, IMO). Perhaps shallow swimmers would prefer, though...

Images are slick and pretty, per the usual Ciro Marchetti decks--lots of gold filigree and eye-popping colors. But, for me, it's more like eating Lucky Charms cereal than Bear Naked Granola, ifyouknowwhatImean.

I'm looking forward to The Complete Lenormand Oracle Handbook: Reading the Language and Symbols of the Cards by Caitlin Matthews that will be out later this year; perhaps reading her scholarly, considered insights will make me want to give Lenormand another chance.

For now, I'm sticking with the complex, archetypal Tarot to fit my needs...