The Emoting Suit of the Snowland Deck

After covering the Energy Suit of our Snowland Deck (gosh, has it been over a year already?), it's time to explore the Emoting Suit. Enjoy!

Snow, ice, frost—this element is a big component of the Snowland Deck, especially since the white stuff underscores every image. Seems especially fitting, considering both my husband and I have our Sun (and significant planetary placements) in Scorpio (a water sign). 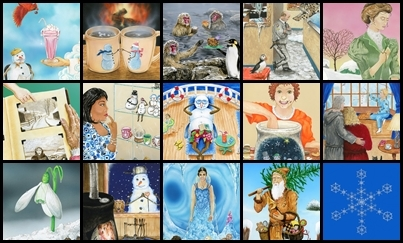 In our deck, we associate the Emoting (Cups) cards to the water element—the nebulous, feminine suit of feelings, moods, aesthetics, relationships, love, yearning and emotional nourishment.

Like all Aces, our Ace Emoting card presents an invitation—a window of opportunity. Depending on our receptivity to things new or surprising, we can choose to accept, reject or ignore the Divine offering. 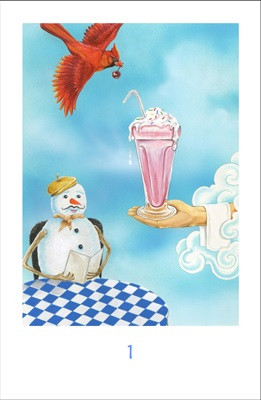 A dapper snowman sits at a table covered with a checkered tablecloth—a pattern symbolizing the contrasting (and sometimes, contradictory) forces in life. Will our snowman be influenced by external forces or a “checkered past”—or will he welcome the strawberry milkshake with joy? He’s holding a menu in this Ace: did he “order” this cosmic gift via the menu of attraction or prayer—or is a gift from (and on) “the house"?

Make no mistake: past conditioning can, and does, influence our reactions to the Gift from the cloud. 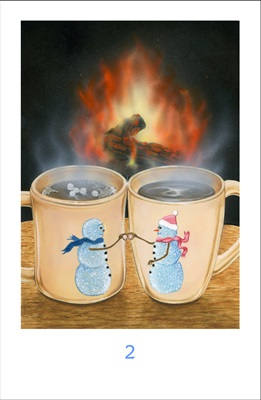 When our heart is open and joy fills our cup, we’re ready to share our love with another. In 2 Emoting, a snowman and snowwoman reach beyond the borders of their mugs, ready to exchange intimate feelings and notions in front of the fireplace. Although coffee and cocoa are two different beverages, at core, their energy (when balanced and reciprocated) serves to warm and soothe the soul. In our 3 Emoting card, fond feelings have bubbled over into leisure and camaraderie. How liberating to be comfortable among friends to the point where you can talk about anything, have a few drinks and let off a rip roarin’ fart without embarrassment (as one of our Japanese snow monkeys has done!). 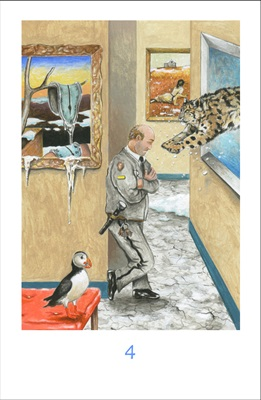 Moving on to 4 Emoting, the emotional waters form a stable pool, so to speak, but without the ability to see—or a willingness to see—beauty, stagnation results. Two celebrated paintings surround the museum security guard—Dali’s “Persistence of Memory” and Wyeth’s “Christina’s World”—yet, he fails to recognize their magnificence (not to mention the snow leopard leaping out of the frame). 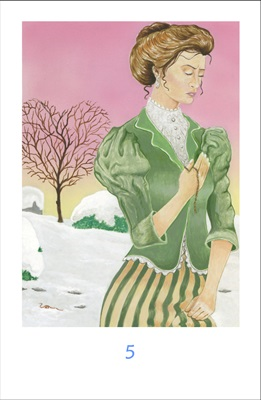 The 5s in Tarot tend to bring some type of instability, challenge or moral question to the forefront. In the 5 Emoting card, a tear streaks down the face of a woman clothed in Edwardian garb. She holds part of a broken necklace, while the other half lies in the snow behind her. Further back stands a snow-covered gravestone and a heart-shaped tree absent of leaves. Is she sad? Anxious? Angry? Relieved? We leave that up to the viewer to decide… 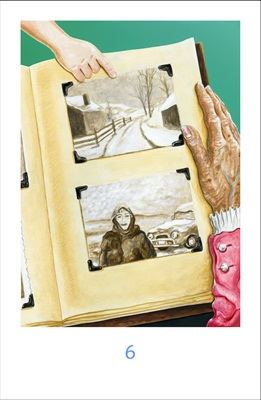 A pet peeve of both mine and Ron’s involves yet another Rider-Waite-Smith clone hitting the market, laden with cards that are supposed to indicate one thing…but portray something altogether different (or, not much at all). One such card is the 6 of Cups which, in most RWS-style decks, shows an elfin figure giving a goblet of flowers to a child in a courtyard, while a man ascends a staircase behind them. One of our goals with the Snowland Deck was to actually portray a card’s common interpretation. So, if the 6 of Cups usually means nostalgia, a walk down memory lane or a “blast from the past”—why not illustrate it outright?

So our 6 Emoting card depicts a grandmother showing her grandchild a family photo album, including pictures of the old farmhouse she grew up in, as well as her first car. 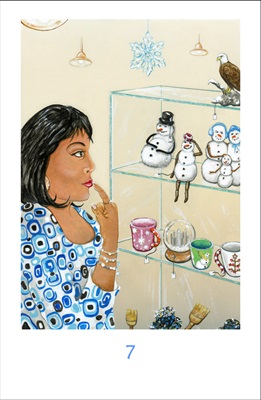 The 7s usually bring analysis, evaluation, strategy and the clarification of values. In our 7 Emoting card, a woman stands in a curio shop, debating on which item to purchase—an eagle statue, a mug, a porcelain snowfamily, a cityscape snow globe, etc. Each piece of merchandise symbolizes a state of being, goal or feeling. But, with every choice, there is a price. What is she willing to pay for what she wants—or thinks she needs? 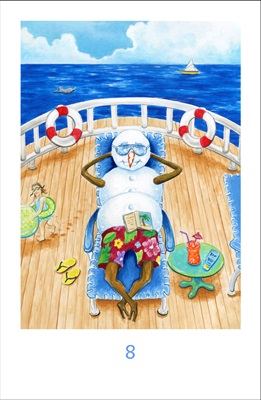 The 8 of Cups often suggests walking way from a perfectly good situation in order to follow a higher calling or alternative soul path. But it can also indicate a sabbatical, retirement or temporary leave of a successful, emotionally satisfying circumstance. What better way to show this, we thought, than an unbuttoned snowman relaxing on the deck of a cruise ship (500 SP sunblock nearby, of course). 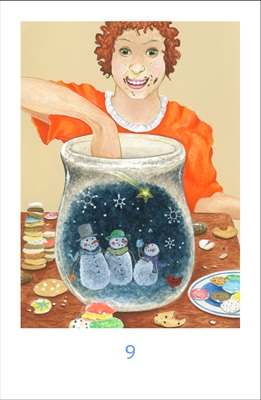 Too much of a good thing can lead to stomachaches at best—and dangerous health risks, at worst. Our smiling teenager dips his hand in the cookie jar yet again, while numerous bitten-into cookies lay strewn across the table. Is this a one-time occurrence—perhaps after celebrating some type of holiday or achievement—or is this a patterned behavior? And what if he takes this habit into adulthood? Sometimes what we wish for (or think we want) isn’t in our best interest, no matter how deliciously the cookie crumbles… 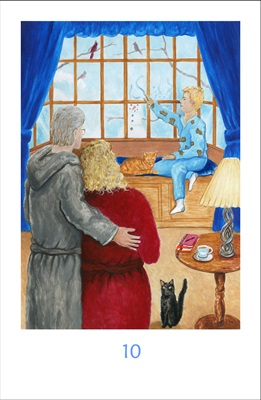 The end of our numbered cards brings us to “The Happy Family”—10 Emoting. This card is one of the most personal in from our Snowland Deck because Ron painted us—as well as our son, Noah, and our kitties. This image is especially poignant for us because these two cats were born under our bed, part of a litter birthed by a stray we adopted. While our orange tabby, Stewart, is still with us, his black shorthair brother, Neo, had to be put to sleep Christmas Eve 2012 after a sudden (and devastating) kidney disease. Even being a “happy family” full of joy, respect and laughter doesn’t shield the heart from the grief of loss. Yet, it’s a blessing to be surrounded by love when a cherished family member passes from this life to the Other Side. 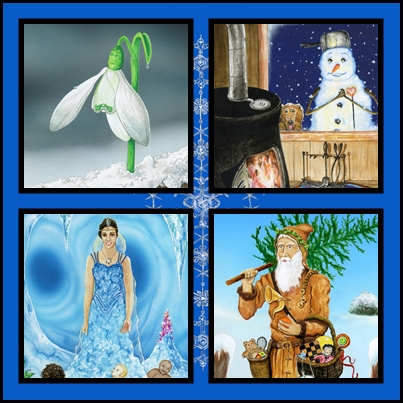 We’ve dispensed with the medieval (and largely irrelevant) Court Card designation, favoring instead to name these sixteen cards Youth, Quester, Nurturer and Director. I delved deep into Nordic mythology, Germanic lore and snow-themed literature for our Approach Cards (as we call them).

Both our Youth and Quester Emoting find their inspiration in stories by Hans Christian Andersen. 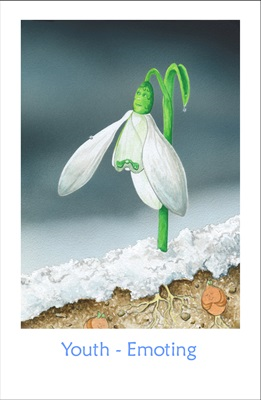 The Snowdrop, our Youth Emoting card, prematurely heralds the coming spring, connecting to early blooming, precociousness, emotional sensitivity, fragility and naiveté. To quote from Andersen’s story of the same name:

"And the snowdrop was put back in the book; and it felt both honored and happy to know that it now was a bookmark in a volume of poems written by a poet who was the first to write about the snowdrop; a poet who, like the flower, had stood in the bitter, winter weather with a dream of summer in his soul: a summer fool. The snowdrop interpreted what she had heard her own way, as we all do." 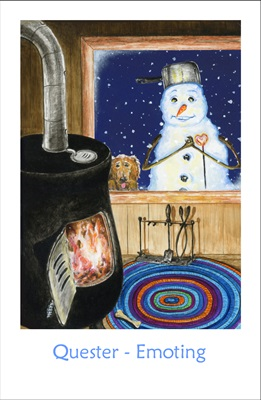 Quester Emoting, our equivalent of the Knight of Cups, depicts the infatuated, quixotic energy of the hopeless romantic. The Snowman, also based on an Andersen tale titled "The Snow Man", shows a dog and snowman yearning outside a window. One desires to be back inside its master’s house in front of the blazing stove (with bone firmly between the teeth), while the other pines for an object of his affection that, if attained, would essentially destroy him. For you see, when the neighborhood boys constructed the snowman, they used the stove’s poker to help him stand upright. Thus, the snowman wants what he can’t have because he’s, at core, formed around one of the stove’s necessary tools. 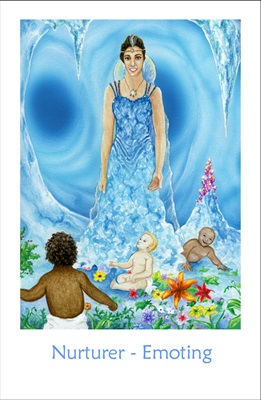 Our Nurturer Emoting is Berchta, a Germanic goddess of abundance that watches over souls in transit—especially ones from unbaptized babies, stillbirths, miscarriages, abortions, those who’ve not received proper burials and those driven to suicide by broken hearts. As a double water card (Queens/Nurturers preside over the water element, as do the Cups/Emoting suit), Berchta’s compassion and gentle watchfulness serve as a touching portrayal of this energy. 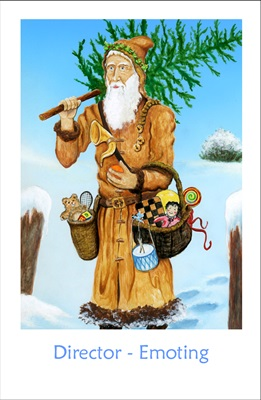 Lastly, we come to our Director Emoting card. Who better to illustrate the nature of giving gifts, delegating blessings, avuncular kindness, tender fatherliness and lavish benefactor than Father Christmas?

I hope you enjoyed a tour of our Snowland Deck’s Emoting suit. With all the blues and greens in our color choices—and as I mentioned, the aqueous foundation of our theme—it could be argued that these cards are especially suited for those born or influenced under water signs, as well as those wanting to add the energy, and gifts, of the water element to their divination or meditation practice.

The Snowland Deck is the co-creation between the husband and wife team of Janet Boyer  and artist Ron Boyer. Ron painted each image on specially prepared, hand-cut, sanded wood boards using gesso, then acrylics. To find out more information about the Snowland Deck, including how to order it, please visit SnowlandDeck.com. Don't have yours yet? Visit SnowlandDeck.com to get one in time for the winter holidays.