How Not to Run a Restaurant (Fairdale Inn in Carmichaels) - Review

When Adam and Sherrie's opened up in Carmichaels, I was thrilled that a sit-down restuarant came to town.

Well, the food was OK, but the hostess was a sourpuss--and the energy of the place felt tense.

It ended up shutting down within months. I guess

Fast forward a few years, and a new restaurant opens up on the same property: Fairdale Inn.

Living in a small town, it doesn't take long to find out that it's the same chef. Apparently, he and his first wife (the "Sherrie" of Adam and Sherrie's) got a divorce, he remarried, and was having a go at the restaurant business once again (with the help of Mommy and Daddy's money).

We decided to give Fairdale Inn another chance, and were delighted to see that the food was yummy. What a bonus to have a good restaurant 3 miles away instead of, say, 20 miles away!

They had a Sunday brunch, and it was delicious. We started making it a weekly family outing...but then, they stopped doing it. "We'll start it up again in the Fall", their Facebook page said.

See, that was one of the main problems of Fairdale Inn: you never knew when the hell they were open! They relied on a Facebook personal page (not a business page) to post their wildly flluctuating hours and menu. Half the time, they didn't answer posters requesting reservations. They'd have weekly Friday buffets, so those were (mostly) dependable, hours wise. (Price wise? Inflated, but I'd rather pay a few more dollars to stay local considering how, at the time, gas prices were insanely high.)

Rumors swirled about the place. The chef had tantrums during restaurant hours, threw food on employees, cussed out everyone within earshot. 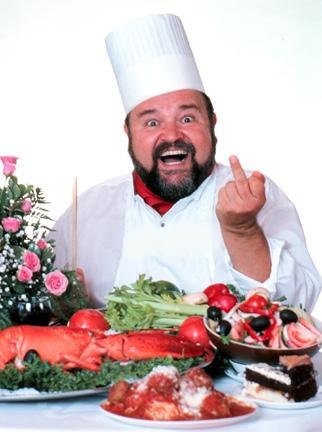 My Mom shared stories she heard, hair salons buzzed with horror stories and complete strangers would tell their own personal Fairdale Inn saga (after I raved about their food, mind you). All the negative press was completely unsolicited (I was sort of a fan girl, trying to get people to try to the great food, in fact!)

Knowing he was a fellow Scorpio, I still defended him. I know we Scorps can get intense, and are often misunderstood. Slackers don't like the high bar we set for excellence, and resent it when we have to point out their errors. Plus, I knew what it was like to be lied about--a victim of rampant rumormongering among those with nothing better to do with their time than tear down those trying to accomplish something.

Yes, it was obvious the Fairdale Inn had dependability issues. They never kept consistent hours, leaving residents perplexed if they were still a sit-down restuarant--or only offered catering.

And I admit to wincing when, on his personal Facebook page, "Chef Adam" ranted against citizens who live in Greene and Fayette counties (the main counties the restaurant serves), saying that no one wants to work in those counties--and are basically lazy. Yikes, I thought. Not good PR to be doing that!

But, understanding that, indeed, some people living in these counties are lazy, misuse welfare/disability and are outright drug addicts--I still couldn't believe the rumors that Adam was abusive.

My friend, Brenda, used to work at Fairdale Inn--and was an excellent hostess. It was one of the reasons we kept coming back. Even after I found out that Chef Adam printed off pictures of Brenda with "This is NOT Chef Adam's wife!"--and posted them all over the walls of the dining area (I kid you not--I know a couple people who actually SAW this with their own eyes)--I thought maybe it was Adam's deaf wife, Lori, who was jealous of Brenda's vivacity and professionalism--and insisted that Adam put those pictures up (I guess some patrons mistook Brenda for Adam's wife).

Even until last week, I defended "Chef Adam". But come Wednesday, I placed an order for two creamed chicken and biscuit dinners on their Facebook "friend" page. I made to sure to post 90 minutes before my husband was to pick the dinners up after work, just to give them enough time to check the FB page. When 50 minutes went by and there was no acknowledgement of my post, I thought I'd better call the restaurant so they'd have time to have the meals ready. 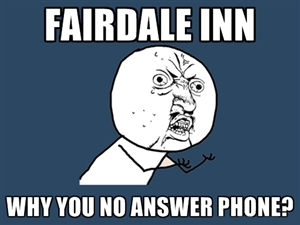 To my surprise...I got an answering machine.

Ron had several errands to run after work, so I had to make a quick decision so he wasn't waiting a long time at the restaurant. I posted again to their FB page, under my original order--and they fired back "Our phone is working. 724-319-XXXX".

I told them I called and got an answering machine.

Frustrated, I decided to just order Chinese. They, at least, kept consistent hours, and always had great food--and were on the same road as Fairdale Inn.

In my frustration (I mean, I had been witnessing years of this kind of stuff from them), I posted the following to my personal Facebook page:

Answer me this: What kind of restaurant relies on FB to post hours--which fluctuate (that's right, no steady schedule). And, their FB presence isn't even a page, but someone to "friend"? And, does not acknowledge an order posted on their timeline, under their present ad/special--after an hour has gone by? And THEN, when you CALL said restaurant to PLACE the pick-up order...you get a f*&%$#@ answering machine?

Some of my friends chimed in, wondering if this type of restaurant was even legit.

So I go offline for a few days so I can get some writing down. Imagine my surprise when I got back online and found this private messages to me via Facebook:

You know Janet I thought about what you said in your post for the last few days and realized something. Working in a restaurant takes a lot of dedication, passion about food, pride in what you do and working your ass off so you can sit down and eat a good meal. That means being on your feet for 12+ hours a day and not getting to spend a whole lot of time with your family. I am very proud of what I have accomplished at Fairdale Inn. I started with nothing when I opened Adam & Sherries and started with nothing when I opened Fairdale Inn again. I am a CHEF and this is MY kitchen. If someone doesn’t like the way I run things then don’t work here or don’t come here. Greene & Fayette County lacks 2 things in most of its restaurants. Standards and Class.

Sometimes the road to getting those two things does not come easy. Some of the people around here parents raised them in a fucking barn and have no manners and yes I yell. Like I said before its MY kitchen and I will do whatever it takes to make sure the customer gets good safe food. Sometimes to be a part of the winning team takes the same thing as playing football. Discipline and, cutting the dead weight. Like Hartley Inn we have a waiting list of people who want to work here. That does not mean I hire every person that walks through the door. I could tell you so many stories about people who worked here or just who came in and interviewed with me and told me horror stories about the other restaurants in town (including your favorite) about using spoiled or the classic of the 5 second rule if it hits the floor. So next time you are out at the other Inn gossiping about how I run my business with the servers or other people who like to stick their nose where it don’t belong and eating a meal that may have been scraped off the floor I really hope your enjoy. I have worked in the food industry for 21 years, this is my life and I am not going to change who I am to accommodate lazy people who just want to come to work to get a free paycheck. My Mother taught me to work for a living.

Calling me out on Facebook was wrong and you know it. I know you took the post down but people saw that shit. How would you feel if I went on your page and publicly humiliated you. At least put that shit in a private message or better yet come here and tell me to my face if you got a problem with me or Faridale Inn. Just like your business it supports your family and buys and supplies the needs for your son Noah. Fairdale Inn does the same for my daughters but how do I explain to Bella that I may have to cut one of her dance classes cause come crazy lady on FB is writing bad things about us and we are losing business. If you got a problem with me do yourself a favor and keep it private.

Lots of Love and Go Fuck Yourself
Chef Adam

Below is the actual screenshot of his "send off": I guess all the rumors about "the chef" at the Fairdale Inn being a nightmare to work for were true. All these years I held off from judgment because:

1. Adam was always nice to me.
2. He's a fellow Scorpio, and, as I mentioned already, I know how we tend to get misunderstood because of intensity--or are even outright lied about. 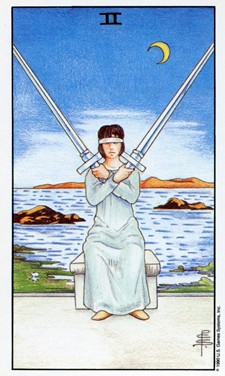 Yes, even after the myriad reports we've heard from people about town and complete strangers--I gave him the benefit of the doubt. (Interestingly, one of Ron's co-workers just told him Friday that he attended a wedding reception at Fairdale Inn and that the chef was "screaming at a dark haired lady that kept pointing, as if she couldn't talk". Ron put two and two together that it was Adam yelling at his deaf (!) wife. DURING the wedding reception. Many of the attendees rolled their eyes at one another--and some even left. Lori can lip-read, which would explain Adam yelling.)

In Tarot terms, I guess you could call this a classic case of the 2 of Swords: "not seeing what's in front of you", "refusing to see" or even "being presented with conflicting information and not seeing the most obvious".

Embarrassing, really, since I've always prided myself on having an unparalleled BS detector...