You thought this post was going to be about someone Faraway, didn't you? ::wink::

Nah, it's about The Emperor being a dickhead. You know, the Tarot card? I'm hard at work on my upcoming book Naked Tarot (Dodona, Summer 2015) and I wanted to share a brief snippet from my overview of The Emperor. Below, are two renderings of this Tarot card: The first, from our Snowland Deck (my hubby did the art), and the second is from the Universal Waite Tarot: 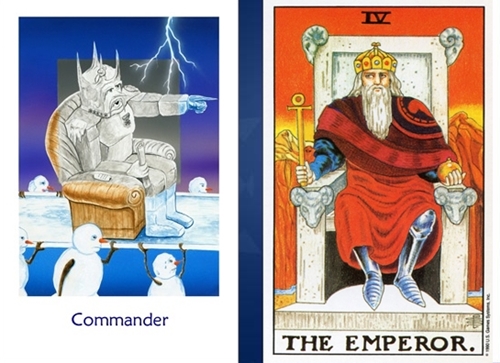 Warning: if you're offended by F-bombs and lewd prose, you might want to move along.

Dickhead. From the tax-code toting IRS man to the super--strict school principal, the head-up-his-ass boss to the belt-wielding bully father, The Emperor brims with testosterone. He's the one rumbling down the road with his big-as-fuck truck, an obvious overcompensation for his little wee wee and pervasive insecurity (especially when enormous rubber balls dangle from his tailgate). Clipping wings with an air (stink?) of authority, he sits upon his throne with stiff neck and stern visage. But if you look closely, notice that his eyes rove to the side at best--and shift like a crackhead Cylon at worst...

OK, just a taster--not even an appetizer.

So, anyway, after writing the chapter on The Emperor, imagine my surprise when I realized an artist depicted this card as--wait for it--an actual dickhead! 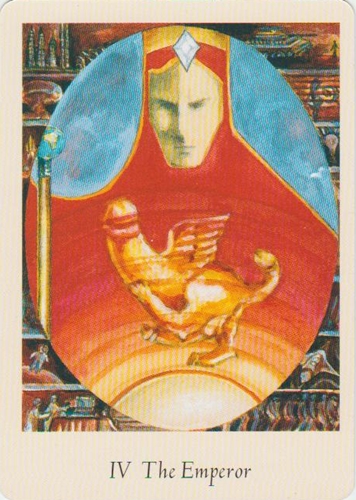 The image above is from The Intuitive Tarot by artist Cilla Conway. Not only is he a dickhead...but, apparently, also a dicktail and a dickdick. (Not to be confused with the child's game duckduck, as in goose).

Thus, if you ever suspected that The Emperor was a dickhead, I'm pleased as punch to assure you that, yes, he most certainly is.