There’s a handful (or two) of feline Tarots on the market, but by far the best of them is the Mystical Cats Tarot by Lunaea Weatherstone and Mickie Mueller. 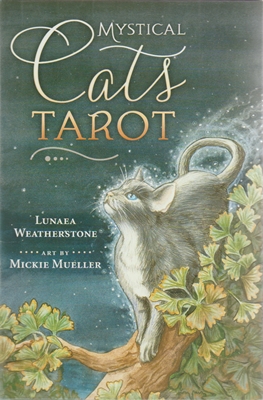 Rather than anthropomorphisizing cats or merely posing them in Rider-Waite-Smith scenarios and stances, the creators took on the challenging task of portraying them in alignment with their varied natures: curious, mischievous, playful, mesmerized, predatory and—of course—lounging.
Some of the 22 Major Arcana have been renamed (I’ll list them later) and the 16 Court Cards become Kitten (Page), Tom (Knight), Queen and King. The 40 Minor Arcana cards are divided into clans: Fire (Wands), Sea (Cups), Sky (Swords) and Earth (Pentacles). Weatherstone says of the four clans:
“Although every cat is unique, they have common affinities and traits that are determined by their clans, both by heritage and by clan culture. It would be difficult for an independent Sky Cat to feel at home among collective-minded Earth Cats, or for a dreamy and psychic Sea Cat to understand the restless urge for adventure that motivates a Fire Cat. Your own cats also belong to one of the clans, though they may not choose to reveal it to you. By observation and deepening your knowledge of clan characteristics, you may come to know them better—and know yourself better as well.” 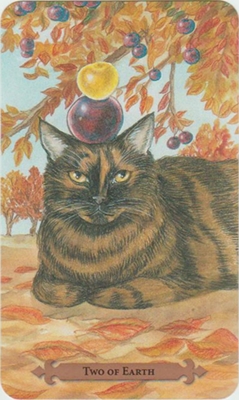 As with all her Tarot deck companion books, Weatherstone’s prose proves spiritually insightful and psychologically relevant, not to mention an enormously enjoyable read. For every card, she shares a general overview as well as sage “cat’s advice” for both upright and reversed images.
Mueller’s watercolor renderings are adorable, perfectly capturing cat antics both expected and impenetrable. What I love most about her art for the Mystical Cats Tarot, though, is her conscious act of adding herbal infusions to watercolors as part of her artistic process. Catnip made it into the paint for every image, while various card-specific herbs were included based on significance and symbolism. For example, the artist incorporated ginkgo leaf and olive into the Stars card (ginkgo is noted for its memory-enhancing qualities).
Thirteen artist sketches with collaborative notes between Weatherstone and Mueller serves as a nice touch to the 201-page companion book, giving us a behind-the-scenes peek into the often demanding work of deck creation. (Weatherstone’s notes to Mueller about raising up a cat’s head with the flehmen response so it doesn’t look like a Mystical Cat hairball is too funny!)
Cards measure approximately 4 ½ x 2 ¾ inches with a flexible, satin finish card stock that shuffles like a dream, while the attractive mirror-image cat’s paw motif on back is ideal for reading reversals.
There are four spreads included in the companion book, and I’ve tried the 3-card Shield of Sekhmet layout with great success. I look forward tot trying the Nine Lives Spread sometime this year (on a momentous occasion).
I’ve used the Mystical Cats Tarot several times within the last few months, and find it extraordinarily accurate—and a delight to use. Whether this is because of Weatherstone and Mueller’s talent or from owning (and loving) cats I can’t be sure. But if you DO adore cats, this is THE Tarot to own, in my opinion.
Here’s a rundown of the (mostly) re-titled Major Arcana cards: 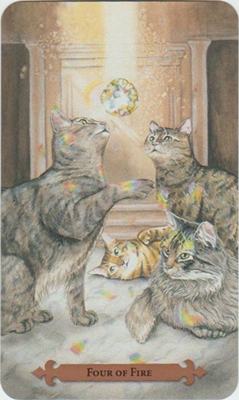 This looks adorable! I think I am going to get it - cats seem so perfectly matched to the tarot, and I can't believe I don't own a feline-themed deck yet. I often read with my beautiful black cat asleep on my window sill above me.

I think you'd love this deck! It's the best feline Tarot on the market, IMO. :o) Nice companion book, too. (We have a black cat, as well; he'll be 2 years old in May. He's so adorable and naughty! Our orange tabby loves to walk on my papers as I write...leaving muddy footprints behind.)