Check out this fascinating new online (free!) oracle by my pal, Craig Conley. I wasn't expecting much when I played, but--holy cow--it was so accurate! Make sure you click on Preliminaries to get the most out of your reading when you visit here. 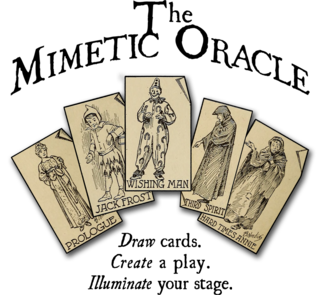 It's been said that theatre reveals what is behind so-called reality, and that a text exists only as an event that reveals the reader’s self.  That’s the philosophy behind the Mimetic Oracle, which draws from 92 archetypal characters in six vintage plays, with 166 spoken lines and 31 stage directions in the mix.  With the system, you randomly draw five characters and generate a script to illuminate whatever drama of life you find yourself in.

How does a collaged dialogue make sense as a reading?  “We make sense of a text by relating it to the context of our knowledge, emotions, and experience.  But since such contexts will be different for particular readers, so interpretations will vary also” (Peter Verdonk, Stylistics, 2002).  As William Saffire has noted, a reader interpreting a text becomes a partner in a new creation and is free (and perhaps even compelled) to find meaning that the original writer did not intend (No Uncertain Terms, 2004).

The composition of the cast of characters may offer important insights into the nature of your reading.  For example, is there a “cold” tone to the scene with figures like Jack Frost, Santa, or a tin soldier?  Are several grandparents and other elders present, indicating wisdom or authority?  Is there a preponderance of mothers and nursemaids to suggest nurturance?  Have mysterious or frightful spirits and ghosts made themselves known?  Do children predominate, suggesting naivety or new beginnings?  Are several Irishmen present, traditionally associated with luck?  Two different fiddlers may appear, suggesting the importance of timing and harmony.  Four clowns might also congregate, to lighten the tone.  Nine characters hold walking sticks or crutches, indicating sources of support.  Two carry umbrellas, having prepared for inclemency.  Look also at the directions characters face.  Are most or all facing left, or right, or forward?  Such alignments may be meaningful to your situation.

Rather than ask a particular question, the preferred way to use the Mimetic Oracle is to first think of a short title for the personal drama in which you find yourself.  There’s no wrong way to do this — simply attempt to encompass your situation in two to four words.  “What Happens in Vegas” might be an appropriate title for concerns about an upcoming vacation to Nevada.  “A Question of Romance” might serve if you are worried about a love interest.  “The Agreement” might be a title involving a commitment or a contract.  “All Through the House” might denominate a domestic issue.  “Hurry Up and Wait” might address a particular limbo.  “What Goes Around” might be an appropriate title for a reading intended to identify what’s about to come around.  “Cat and Mouse” might be appropriate for thwarting an opponent.  “The Promotion” might name a work-related issue.  For a more general reading, try a broader title like “That’s Life” or “The Way of the World.”

Here’s a sample of what a reading looks like.  We asked the oracle to generate a script for “Wednesday's Promise,” to give an insight into what to expect mid-week: The script begins ambiguously — a tin soldier called Private Black has a “brightening” attitude, even as Mary despairs that the last hope is gone and that her strength is leaving.  The mood seems more ominous as the Grandma character agrees with Mary’s despair and the curtains slowly fall.  But then the Wishing Man casts a rhyming spell, conjuring buzzing bees to bring everything to life again.  A character with the unusual name “Attentuated Tootsy” laughs, bringing the scene to a joyful close.  We now realize that the curtain was shutting off the negativity, marking an end to that act of the drama and signaling a new act in which magic is in the air and laugher predominates.  So this is a very positive reading, in spite of its unpromising beginning.

To try out your own free reading, go to http://www.mysteryarts.com/play/.

— Craig Conley is author of The Young Wizard's Hexopedia, the Tarot of Portmeirion, HarperCollins' One-Letter Words: A Dictionary, Pomegranate's One Letter Words Knowledge Cards Deck, and Weiser Books' Magic Words: A Dictionary.  He is co-author of New Star Books' Franzlations: A Guide to the Imaginary Parables.  He has published dozens of articles in such magazines as Verbatim, Pentacle, Mothering, and Magic.  His work has been profiled in the New York Times, the New York Post, The Wall Street Journal, The Chicago Tribune, National Public Radio, The Dallas Morning News, Publishers Weekly, The Associated Press, and dozens of others.