Patronage of the Arts - How Much Writers REALLY Make (and More)

In days of old, artists were afforded the opportunity to create via patrons. The word "patron" comes from the Latin word patronus, a term you may be familiar with via the Harry Potter books. It means "one who gives benefits to his clients". In the Potter world, a Patronus was a spectral helper. In the arts, it someone who sponsors a person or group for the sole purpose of supporting the arts--and receiving create objects and aesthetic satisfaction in the process.

In fact, according to the book The Swerve: How the World Became Modern (about Renaissance history):

Authors made nothing from the sale of their books; their profits derived from the wealthy patron to whom the work was dedicated. (The arrangement — which helps to account for the fulsome flattery of dedicatory epistles — seems odd to us, but it had an impressive stability, remaining in place until the invention of copyright in the 18th century.)

What many readers don't realize is that, for most modern traditional authors, royalty for EACH book sold is only a dollar or two. Paid an advance? An author has to first make the advance up via sales before royalties kick in). Book bought used online or in a thrift shop? NO royalties at all paid to the author.

If you're lucky, you can make some cash via self-publishing through Kindle. But the "Hugh Howey" effect is as about as rare a hitting the million dollar jackpot.

Amanda Palmer makes over a million on her first Kickstarter. Since she went on Patreon, she gets over $30,000 a month from her patrons. Wow! And good for her!

But many of us don't have that kind of reach. And that's OK! We (Boyer Creations--my little family and I) believe we'll touch who we're supposed to. And, the Universe will touch who will be blessed by supporting us and our Art.

What is Patreon? Unlike crowdfunding venues like Kickstarter and IndieGoGo which focuses on raising money for a specific project or product, Patreon allows for individuals to directly support artists in all their creative pursuits in exchange for exclusive content and products--things not available anywhere else. It's modern patronage--and it kicks some major ass! (It makes me happy to see all the artists on there, making awesome Art--and getting loads of support for it. We need more artists, people!)

And so The Boyers are on Patreon! Creating fun, exclusive content like monthly AstroTarot Forecasts, original recipes, Boyer Artifacts (stuff mailed from off our shelves/drawers to your home--COOL stuff), Ron's coloring pages, Tarot/Divination videos, specially made (signed) paintings from Ron...and more. 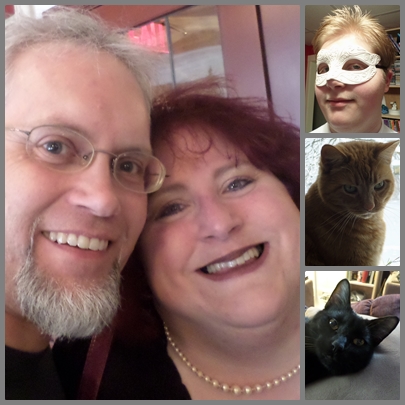 Look at those faces! Don't you feel compelled to support us? (Teehee!). And yes, the kitties will make videos--at the highest patronage tier. (Hey, they're cats. You know how there are!)

Visit our Boyer Creations Patreon page at Patreon.com/JanetBoyer to see all the goodies we're offering. We already have five fabulous Patrons, and we're so humbled and grateful!

Below is the Boyer Creations Pyramid I made to show you exactly what you're getting at every tier level. So. Much. STUFF. Lots of cool things are already up, so you'll be able to access tons of goodies already.

I've given so much to the world, for free, over the last 15 years. Over 1,000 reviews. Hundreds of articles. Dozens of AstroTarot Forecasts. Dozens of free readings both privately and on Facebook.

I figured it was time to create an opportunity for my fans to directly support me--and get exclusive content not just put out there for the masses to (mostly mindlessly consume). It's a "put your money where your mouth is" invitation--a way to directly support authentic, full-strength, original work.

And did I mention how humbled and grateful we are for our Patrons? You have no idea! Bless every one of you who've ever bought one of my books, or our decks, or the Charming Oracle, or a reading, or placed a few bucks in my blog Tip Jar. Your support means so much...and I thank you from the bottom of my heart.

See you on the Patreon blog here?

Hi there! Are you signed up for my Newsletter?

If not, visit my Mail Chimp Newsletter sign up page at this link to start to receiving news, sneak peeks, special offers, original photos and more!