The world doesn’t need yet another boring-ass Tarot book regurgitating Waite, Wirth or Uncle Al. Seekers trying to learn the cards are frustrated and fed up—weary from sucking the dry breast of esoterica with no useful milk to show for it. The good news? No Golden Dawn snooze-fest or Crowley catatonia in Naked Tarot: Sassy, Stripped-Down Advice from the Cards!
Spiritual adventurers like you are burning for truth—hungry for ways to affect, and improve, your destiny. Tarot can deliver, but most books offer impractical, confusing, irrelevant and regurgitated card interpretations—causing seekers to throw up their hands to say “I just don’t get it!”
Your frustrations are over: with raw simplicity and outrageous honesty, I present a shitload of helpful, hilarious and relevant advice that will forever change how you see the cards—and finally equip you to understand, and read, the Tarot.
No punches pulled. No sugarcoating. It’s time to be forearmed, forewarned and foresighted. It’s time to get…naked. Naked Tarot: Sassy, Stripped-Down Advice will provide (for each card):
And the Court Cards? Original, deep psychological profiles off all 16 cards, including correlations with MBTI/Keirsey, ANSIR, the Enneagram, StrengthsFinder 2.0 and more.

Below is a sample chapter from Naked Tarot: Sassy, Stripped-Down Advice:
8 of Coins - Do It Again. And Again. 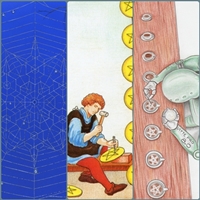 Absolutely, this is a book I'd read! Can't wait til this one is done, Janet. So glad you didn't let the bastards wear you down and that you continue to illuminate the Tarot darkness. ;-)

Awww, thanks, Angie! I'm a bit surprised at how much excitement this book seems to be generating. :o)

I've decided to push up my book's deadline (my awesome publisher actually allows that!), and will aim to have it done by July 30...which means it SHOULD be out in October-November of this year. YAY!

When is this book going to be published and available to buy? I would like to read it.

Hi WTO! I'm working on Naked Tarot now. It will be out sometime next year from Dodona Books. :o) Thanks for your interest and I'm glad you're looking forward to it!