1. What’s your favorite breakfast food? Because I live on a 25-hour day and my waking time slowly rotates around the clock, my breakfast corresponds to the prevailing meal of the hours when I'm getting started. So, when I wake up around sunrise, I enjoy a vegetarian breakfast burrito. If I wake up around noon, I start my day with a Greek pizza. If I wake up around dinnertime, I begin with pesto linguini (extra garlic).

2. Book you’d like to give everyone (or wish they would read)? Wendy Walker's sublime novel The Secret Service, in which spies discover a Tibetan technique to transform themselves into inanimate objects.  But there are just so many books tied for first place. Umberto Eco's The Name of the Rose, for example (perhaps a favorite of all bibliophiles). Thomas Mann's magnificent The Magic Mountain. Norman Mailer's mesmerizing novel of reincarnation in Egypt, Ancient Evenings. Italo Calvino's mind-blowing If On a Winter's Night a Traveler. And one that no one reads but that is a priceless gem: The Attic Pretenders by Ernst Kreuder.  Another little-known favorite: James Stephens' novel of Irish folklore, The Crock of Gold.

3. What makes you laugh? British comedy, especially anything by comedians Harry Hill and the duo Reeves & Mortimer.

4. Song that never gets old: I was just remarking to a friend the other day how "Hold Me Now" by Thompson Twins is so perfectly crafted that it has a timeless quality.  But I have over 1700 songs in my iTunes playlist to which I've given 5 stars, so there are lots of tracks that never grow old for me.

6. Would you rather be hot or cold? It's complicated. (See above.) Ideal climate: Vancouver, British Columbia.

7. Mountain, beach, desert, or forest? Once again I'm a question ahead (blame that 25-hour schedule), but Vancouver again, for the mountains AND the beaches AND the old grove forests.

10. Last thing you splurged on? Nine thousand dollars'-worth of pulverized pennies for a copper floor to restore my house after Hurricane Matthew destroyed it.

11. Bonus Q: What Tarot card’s energy do you need more of these days? I drew a card to reveal the answer, and it was the Queen of Swords. 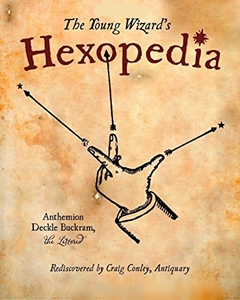 — Craig Conley is author of The Young Wizard's Hexopedia, the Tarot of Portmeirion, HarperCollins' One-Letter Words: A Dictionary, Pomegranate's One Letter Words Knowledge Cards Deck, and Weiser Books' Magic Words: A Dictionary. He is co-author of New Star Books' Franzlations: A Guide to the Imaginary Parables.  He has published dozens of articles in such magazines as Verbatim, Pentacle, Mothering, and Magic. His work has been profiled in the New York Times, the New York Post, The Wall Street Journal, The Chicago Tribune, National Public Radio, The Dallas Morning News, Publishers Weekly, The Associated Press, and dozens of others.  His website is OneLetterWords.com.