Nicola Tesla as The Magician 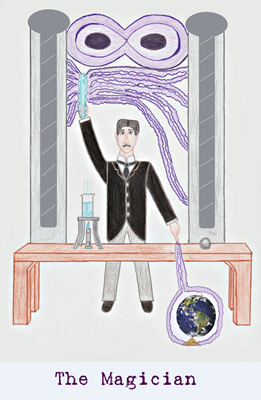 Noah's explanation: I chose Nicola Tesla to represent The Magician because this extraordinary scientist and inventor helped usher in the electrical revolution, including A/C (alternating current), VTOL military aircraft and radio waves. His theories were revolutionary, and unfortunately, Thomas Edison received much more credit, renown and money than Tesla. Tesla formulated his theories, produced sketches and, in some cases, built actual working prototypes (unlike Edison, who was more physical in his approach, favoring a trial-and-error method).

A voracious reader his whole life, Tesla was a brilliant man who spoke eight languages and used botanical discoveries as inspiration for some of his inventions. He was a bon vivant who enjoyed spending money on stylish clothes and rich foods. Tesla also loved pigeons, feeding them from his hotel room and at parks.

In this image, Tesla stands like many Tarot Magician images, except he's harnessing natural resources and pointing them towards the world: he knew wind and solar power could perpetually fuel the globe. In fact, because the earth is surrounding by electromagnetic fields, Tesla wanted to harness it using his World Wireless System via the Wardenclyffe tower. After construction started, investor J.P. Morgan realized that free energy wouldn't bring any profit to himself, so he stopped funding the project.

To represent the four elements/suits often found on the Magician's table, I chose:

Swords/Air = Tesla Coils. These are narrow, vertical cylinders that conduct electrical impulses, and are found in radios from the 1920s and 1930s. Nowadays, they're only used for demonstrations and exhibitions.

Disks/Earth = Metal Sphere. Tesla held one of these spheres in the 1893 World's Fair in Chicago where he allowed millions of volts to course through his body (he wore a rubber suit). The sphere prevented burning on his hands.

Cups/Water = Beaker of Water on the Bunsen Burner. When Tesla viewed tap water under a microscope, he was horrified and disguted at the sight of all the microbes. After that, he became a germophobe--boiling all water before drinking. He was also a compulsive hand-washer, especially after mingling with crowds and shaking hands.

Love this! Perfect choice for the Magician! Something interesting in terms of Tarot: if we rearrange the letters of his name, NICOLA TESLA was INTO ALL ACES. Poetically, he's also A CASTLE LION. For the Water element, he is A STILL OCEAN and a COASTAL LINE. For the Earth element, he ENTAILS COAL. For the Air element of swords, he OILS A LANCET. As for the Fire element, ask his devilish dog, the COLLIE SATAN. ;-)

OMG, Craig, you are BRILLIANT! HAHAHA! Wait until I show Noah. He will LOVE this. (LMAO at "Collie Satan".) I'm so proud of all the research and work Noah put into this card. He thought of patterning it after the RWS, so I told him all the objects on the table symbolize the four elements--and, during his research, look for things that may correlate to them. After weeks of his diligent research, I was so psyched when he told me what they would be. :o)