It’s time for another edition of Sweet and Sour Tarot! For the uninitiated, click here to find out what in the hell this is all about. Click here to see the first installment on the High Priestess.

The short version: Our Snowland Deck is the “sweet” in this equation. Our colleagues’ Twisted Tarot Tales Deck (by James Battersby and Christine Aguiar) is the “sour” part. I compare and contrast these very different cards showing the powerful and illuminating continuum Tarot spans…sometimes, to the “outer limits”.

In fact, in the engaging companion book to the Twisted Tarot Tales, James and Christine reference the old black and white TV Show The Outer Limits—particularly the introductory monologue which admonishes the audience not to touch the screen settings, because “they” are in control of the TV—regarding the Ace of Swords. 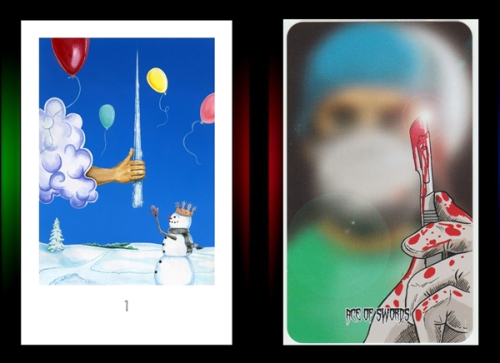 It’s this issue of control (or lack thereof) that James tackles with one version of the Ace of Swords: a surgeon in the foreground, holding a bloody scalpel—and an  operating room in the background faded into “deep focus” (a cinematic technique that, according to James, Orson Welles was famous for using in the  movie Citizen Kane).

In our Snowland Deck, we see a crowned snowman reaching towards a huge, sharp icicle offered from a cloud. Four colorful balloons swirl about in the sky.

From the companion book to our Snowland Deck: 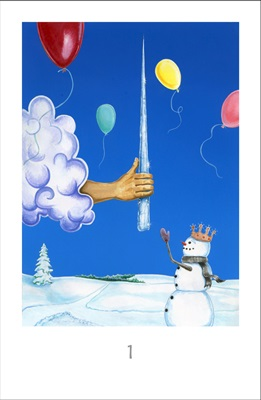 What piercing truth do I need to confront?
What assumptions need bursting?
How can I gain clarity?
How might I narrow my focus?
What is now clear to me?
In what area of life do I need to be single-minded?
What are the facts?

Although the snowman in our cards is “sweet”, the implications of that sharp icicle may not be: what happens if it gets too close to one of those balloons?

And what does the icicle represent?

It represents the truth—the cold, hard truth—that may very well “pop” the lofty ideals (and ideas) floating around the ether…even (or especially?) the pretty,  innocent looking ones.

The snowman in the pictures, crowned with a love for truth, reaches towards the icicle.

Will he be the one popping the balloons—or will it come from the human hand? Or do any of the balloons even need popping on this clear wintry day?

Until individuals are ready for truth—to see things as they really are, without any spin—most prefer ignorance at best and willful self-delusion at worst.

Why? Wouldn’t humanity want to see things at face value?

Not necessarily. To see things as they are, to embrace what is, would require, for most people, change—something humans are notoriously afraid of.

And why are people afraid of change?

Because they can’t control it. Better the devil they know than the one they don’t.

This brings me back to the Twisted Tarot Tales version of the Ace of Swords, where James and Christine tap into this deep-seated fear of loss of control. 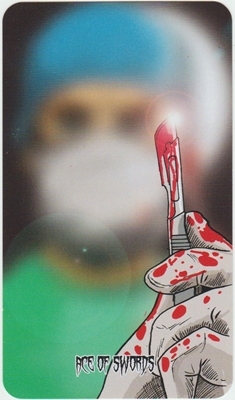 Not having control of my perception is a frightening concept. I am an Air sign—I like to be in full control of my mind at all times. So, when I was thinking of what makes me fearful, and how it could to the Swords suit, I thought about receiving anesthesia before going under the knife. I hate that loss of control and the nagging questions that plague me hours before an operation: "What if something goes wrong and I wake up mid-procedure…or not wake up at all?” Another horrific idea: someone or something controlling your mind—via chemicals, the government propaganda or mainstream media.

Every time I have an operation, the idea of a drug controlling my consciousness makes me uneasy. Seconds before you go out, everything beyond the surgery lamp and doctor disappear in deep focus. That is the last thing a patient remembers before he enters into a deep sleep. Initially, when we introduced the concept for this card, some people thought it was creepy. People like to feel in control.

When I look at this card, I don’t see a sinister surgeon. I see a determined specialist who has cut out a cancerous tumor (or gangrenous piece of flesh) in order to save the patient.

Sometimes, like a scalpel, truth needs to cut away the disease of assumptions and faulty reasoning in order for psychological wholeness to result.

The patient’s well-being depends on it.

In the companion book to the Twisted Tarot Tales, two keywords provided for the Ace of Swords are Focus and Clarity of Mind—meanings shared by the Snowland Deck version of this card.

For this to occur there must be singularity: the mind cannot be distracted by cute balloons. The body cannot be threatened by life-eating disease.

Something will need popped. Or cut out.

Interestingly, James and Christine created two versions of the Ace of Swords card. The one from the official deck shows a crime scene—a homicide—that’s being processed by forensic specialists (we can see numbered tags surrounding the bloodied body, as well as a knife).

And one of the intuitive questions posed by this card as mentioned in the Snowland Deck companion?

What are the facts?

Just like straight-shooting Sgt. Joe Friday from another old black and white TV show (that aired a few years before The Outer Limits--Dragnet) often said: Just the facts, ma’am. Just the facts.

To read my review of the super-awesome Twisted Tarot Tales Deck, click here. To visit James and Christine’s site, click here. To see a frosty video featuring our Snowland Deck, watch below.

Now…do you want to embrace that big-ass icicle of truth? Or care to do some serious cognitive forensics on your mental “crimes”? Or crave seeing without assumptions, confirmation bias or faulty logic?  Then I strongly recommend reading The Art of Thinking Clearly by Rolf Dobelli. It will shake your world (or, at least, the flawed cognitive foundation you’ve laid in your brain).