Often, he asks for three cards--but I often feel like an image could be best represented by only one...or perhaps more.

This was the case with a recent Which Step Have You Reached Today? meme. I thought I'd share, and break down, my own answer--especially for those newer to Tarot. 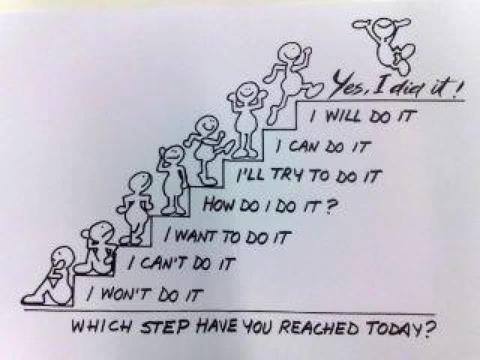 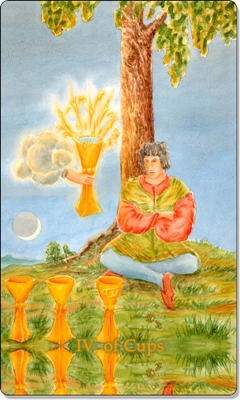 The 4 of Cups is often a card of petulance and stubbornness--of refusing to try new things. This figure would rather stay in the emotional doldrums than exert some effort to change, or improve, his state. I mean, look at his body language! Just like toddler refusing to eat his peas... 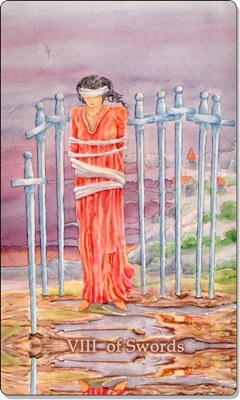 The 8 of Swords depicts a woman trapped by her own self-defeating thoughts. She could easily remove the blindfold and loose wrappings--but chooses to stay where she is. "Can't" is an excellent keyword for this card, because those who utter it assume defeat before even trying. This could be because of a fear of failure--or, a fear of success. Change of any kind, especially for the better, encourages a "repeat performance". This is the nature of growth. And some would rather say in an unlocked cage, proclaiming incarceration, rather than walk out towards freedom...and all the personal responsibility it entails.

I Want to Do It: Ace of Wands 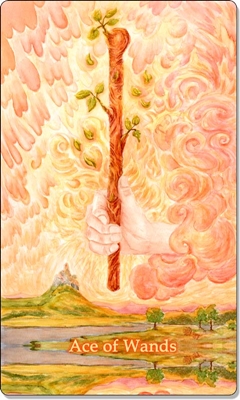 In my opinion, the Wands is the "want" suit--cards of personal identity, desire, passion, gumption, self-starting and excitement. The Ace of Wands is the first stirrings of "wanting" something--much like "wanting" to make, and keep, New Year's resolutions. Whether or not an individual actually follows the desire and takes those first steps...well, that remains to be seen. But the initial enthusiasm is there. 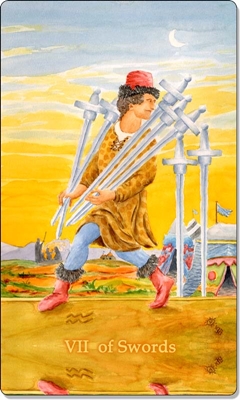 I'm sorry, but the 7 of Swords gets a shitty rap among most Tarotists. I see it mostly as a card of strategy and cunning. It's the energy of figuring out a plan, playing a video game and solving a puzzle.

I'll Try to Do It: Page of Coins 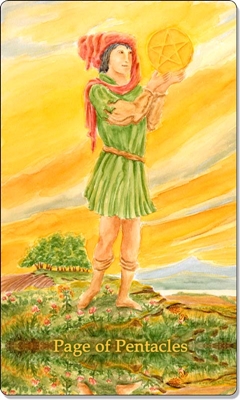 Pages will try anything...but its the Coins/Pentacles/Earth suit that takes the most convincing...and enters the fray the most cautiously. Given the hesitancy of the previous steps, this Page seems like the best fit to me.

I Can Do It: Strength 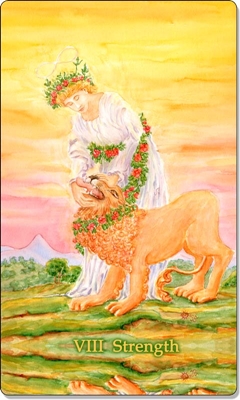 Several cards could fit for I Can Do It, but Strength seemed the most appropriate to me. Whether in a fit of bravado or quiet confidence, Strength comes with an assumption that a task can be met. Still, "can" leaves some wiggle room for loss of confidence or strength: assuming you can tackle, and overcome, a challenge doesn't mean you can. (Why am I feeling a sudden urge to do the Can-Can...?)

I Will Do It: Knight of Wands 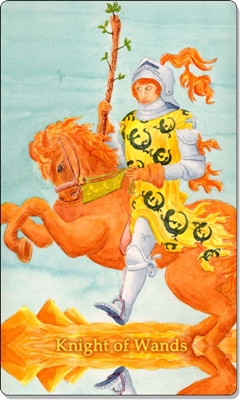 You know that famous quote by Thomas Paine "Lead, follow, or get out of the way"? That's Knight of Wands energy. Now, whether he'll do it well...that remains to be seen. But at least this Knight charges right in there! Initially, I chose The Sun for this one. But then I got to thinking: The Sun would be more I Am Doing It--it's active, shining and public. But past tense "did it"? Well, that would be The World, methinks.

What about you, Tarot enthusiasts? Do you agree with my choices? Or would you choose other card? Weigh in at the comments section below!

Deck Used for This Exercise: The Aquatic Tarot