Merriam-Webster Word of the Year 2018? Justice (And It's a Tarot Card, Too)

Our Word of the Year for 2018 is justice. It was a top lookup throughout the year at Merriam-Webster.com, with the entry being consulted 74% more than in 2017.

The concept of justice was at the center of many of our national debates in the past year: racial justice, social justice, criminal justice, economic justice. In any conversation about these topics, the question of just what exactly we mean when we use the term justice is relevant, and part of the discussion.

You can read the rest of the story here.

One part of the article noted:

Justice has varied meanings that do a lot of work in the language—meanings that range from the technical and legal to the lofty and philosophical.

Tarot readers well know that Justice happens to be one of the Major Arcana cards of the Tarot, a "big picture" archetype that touches every person at some point in life. 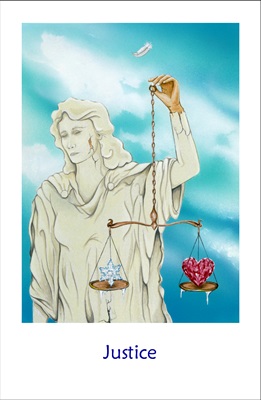 I was going to write a blog post about my ideas on Justice--but when I re-read what I wrote in the Stripped-Down Overview section on this card in my newest book Naked Tarot, I realized there's no need to reinvent the wheel (or is it The Wheel?):

Justice and Judgment are often confusing to Tarotists, especially if you throw in the Wheel of Fortune. Then there’s The Emperor and Hierophant. So who deals with laws? Rules? Consequences? Court dates? Jail time? Bureaucracy? Government? Karma? Ethics? Morality? Well, you have to read each entry in this book to get my take; if you’re reading from front to back, we’ve already covered The Emperor, The Hierophant and The Wheel. In The Hierophant chapter, I stated, “The Emperor rules the letter of the law, but The Hierophant governs the spirit of the same.” The boxing ring where these two duke it out? Justice. The roots of legal codes reach downs towards the bedrock of religion; depending on your moral persuasion—i.e., ideas of right and wrong (Hierophant)—you may take issue with how a particular country translates their religious decrees into actual laws (Emperor).

Even within a particular province or country, some may disagree with laws—as well as their interpretation and enforcement. Thus, the battleground of Justice: this is where laws are discussed, decreed, repealed, appealed and enforced among a group—usually a township, county, state or country. They’re “on the books”, and subject to argument, objection and sustainment. In some patriarchal, fundamentalist, Middle-Eastern countries, laws are inextricably linked with sacred texts with an eye for an eye brand of “justice”: you steal, you lose a hand. You cheat on your husband, you get gang-raped. Bring your family “dishonor” as a modern young woman, and your brother gets to strangle you to death with impunity.

Even the legal systems of Western countries—which many assert are more civilized, rational and fair—may draw harsh criticisms: what of corrupt cops or courts? Jail time for marijuana possession versus multiple DUIs (any of which could have resulted in the death of motorists)? Or the capriciousness (some would say, bigotry) of racial profiling and arrests, not to mention false imprisonments? Granted, some territories appear to uphold equality more than others. In fact, if citizens disagree, they can actually change those laws through voting and political pressure. Participation in local government is important because, in essence, we make the laws of the land—and they directly reflect our sense of parity…or apathy.

So what are your thoughts on the concept (or card) of Justice, dear reader? How does it differ from Judgement in your worldview? Would love to read your take in the comments below!

P.S. Justice image from our Snowland Deck (SnowlandDeck.com). For an original Tarot spread I created based on the Justice card, click here.