Marianne Williamson as the Queen of Cups in Tarot

In my latest book Naked Tarot: Sassy, Stripped-Down Advice, I list real-life examples for each of the Tarot Queens in the section The Queens as Healers.

Naked Tarot was written over a several-year period and was finished late 2017--publishing in Fall of 2018.

Before Marianne Williamson declared her candidacy for President of the United States, I pegged her as a Queen of Cups--with the personal mandate of "All You Need Is Love". As we can see from her interviews and Democratic debates, her life theme is more public than ever.

Here are the pages from my book about the Queen of Cups, the subsection of The Queens as Healers: 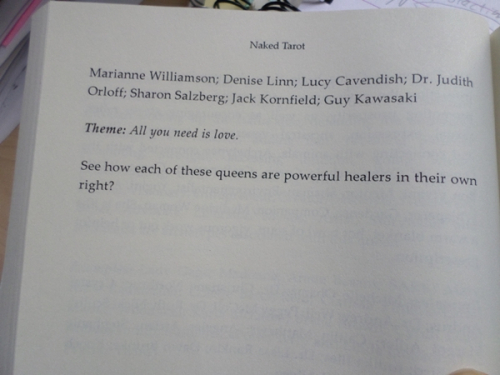 As you can see, several men are also listed, because in Tarot, Queens and Kings don't correlate to gender but energy--how a person conducts themselves on a daily basis.

What famous people (or characters) would YOU correlate with the Queen of Cups? Would love to hear your thoughts in the comments below!