Tarot in the Time of Coronavirus - Hermit and Temperance

Those with strong Hermit archetypes have already been self-isolating. In fact, self-quarantine is a natural state of being. The Hermit goes it alone, seeking knowledge--and trusting that his next step is lit by destiny. This energy is comfortable by itself, not needing the company of others to entertain, distract or solace.

And yet, an actualized Hermit can also embrace others into his/her sphere, experiencing exquisite intimacy and demonstrating extraordinary compassion. (Usually, this is limited to smaller groups, because the energy output is just too much for the Hermit archetype--even among extroverted ones!).

Temperance is a middle path, a synthesis. This Tarot card can indicate blending and practical alchemy, which would cover alternative healing remedies--especially ones that are taken internally (think tinctures, essential oil blends, poultices and tisanes)-- as well as more traditional apothecary. 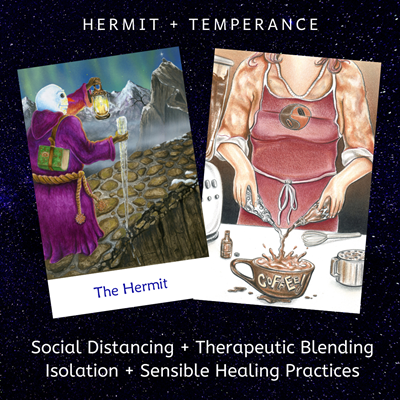 In the Snowland Deck companion, the "secret" I came up with was Solitude prepares for vicissitude (because The Wheel of Fortune is often the next card in a traditional Tarot deck). In many ways, those with a strong, balanced Hermit archetype have an advantage, because they usually operate from their center by default. Just like on a merry-go-round, the center is less wobbly--and less dangerous. (Think of hanging on the edge of a merry-go-round as it spins quickly. Ack!)

Unfortunately, those unfamiliar with Hermit energy may feel off kilter during these times of COVID-19 (aka the coronavirus). Just a few minutes ago, the governor of my state announced that all schools will be shut down for at least 2 weeks. Disneyland and Walt Disney World are closed. Live talk shows are performing with empty in-person audiences. Some places are ghost towns.

Many have chosen social distancing. Some are doing it because they are infected; others, because they fear infection. To some extent, though, this isolation is forced (whether by lower-chakra fears or by Temperance's practicality). 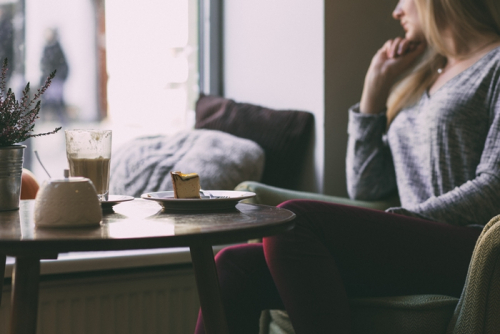 Blog posts are sprouting up, warning that loneliness will be on the rise--and with it, possible health challenges (physical, mental and emotional). For example, Scientific American posted "How to Prevent Loneliness in a Time of Social Distancing".

But the ailments they highlight stem from those who don't feel connected to others. Feeling connecting to others isn't dependent upon having them in physical proximity, however. In fact, many feel lonely among a sea of people.

I can't help but wonder if The Hermit would say:

You are not connected to your Self.  Your center. Your ground of Being. When you're alone, you're aware of this because of the physical separation from an Other--which only mirrors the internal disconnection of the One.

As Terence McKenna points out in the video below: You are the center of the mandala.

I suspect I'll have more to say about this.

For now, I'll leave you with this passage from the Coffee Tarot Companion Book's chapter of Seeking (our version of The Hermit card):

With the omnipresence of social media, individuals parade about their dozens (or hundreds) of Tarot decks and spirituality books—often surrounded by glitzy crystals, fragile flower petals, fresh herbs, glowing candles and smoking palo santo sticks. Pretty to look at, sure—and certainly an enticement to buy more, more, more (after all, gotta keep up with the Body/Mind/Spirit Joneses, right?)—but do such public antics encourage going deeper? Acquiring, retaining and, more importantly, applying empowering knowledge? Only the Instagram posters can tell for sure. However, the biggest leaps of personal growth occur alone—without anyone watching, encouraging or commenting—or so says The Hermit.

Obviously, this passage goes one step further by implying "social media distancing", which brings a whole 'nother layer to The Hermit...

Stay safe everyone. And remember: at core, you're never truly alone. We're all connected.

The Hermit resonates with me. I hadn't realized it before, but I've been a hermit for several years. I'm fine in my own company. I have my books, fiber work, and computer to keep me busy. Because of health issues I am high risk as far as COVID-19 is concerned. That being said, I don't mind being isolated. Do I read the case counts and all that? Sure. Not because I'm panicked - I'm not. I've known for years something like this would happen eventually. The Mother has had enough of us ruining Her and is fighting back.

The best way to get through this is to take it a day at a time, and with positive thoughts and prayers. A sense of humor helps too. I was planning to take my BFF out next week for her birthday. Not anymore! We have plenty of toilet paper but one can never have enough books! If for some reason we would lose the internet, it's inconvenient but not the end of the world. Those of us who grew up in the 60's and 70's can handle this better, I think, than people who don't know who who the Beatles are (a travesty!), read analog clocks, know how to write in script, and use rotary phones (those are some of my favorite you tube vids). And most importantly, as Janet said, we're never truly alone. That's a very comforting thought.

Tamster, that's an interesting point about those of who grew up "analog" may fare better during these times (and we'd def fare better should there be an internet outage!) 🙂 So many have substituted screen time for tactile/physical hobbies and time in/with nature, that they'd likely feel lost during a web blackout.

I'm glad my post offered some comfort. Totally my intention. ❤ Thanks for taking the time to comment!