Thieves Oil - The Legend Behind the Healing Essential Oils

In the mid-1300s, the Bubonic Plague--aka "The Black Death"--was the most deadly disease outbreak in human history, decimating 1/3 of the European population. The sick, dying and dead lined the streets. The poor and rich alike were infected--including doctors and nurses. Although the contagion struck fear in the hearts of European citizens, a few intrepid opportunists decided to steal from victims of the Black Death.

Four thieves were captured for stealing from Plague victims and were sentenced to be burned at the stake. However, the judge was so intrigued as to how these thieves stayed immune to the plague, despite close contact with Black Death victims.

The thieves told the judge that if he spared them from death, they would tell them their secret to staying free of the deadly disease. The judge agreed, and the four thieves proceeded to tell the judge that they were spice and perfume merchants that were out of work because of the Plague. They had prepared a special herbal concoction that they applied to their hands, ears, temples, feet and the mask that the were over their mouths--a blend made up of Lemon, Rosemary, Clove, Eucalyptus and Cinnamon--that kept the deadly disease at bay (we now know that the Bubonic Plague was caused by the Yersinia pestis bacteria that was transmitted from fleas to humans). 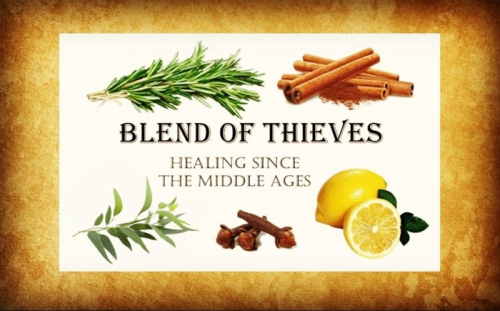 Studies have shown that these five essential oils do, indeed, have anti-microbial, anti-bacterial, anti-viral and anti-fungal qualities--and many herbalists and alternative health practitioners use them as such as part of their healing work. 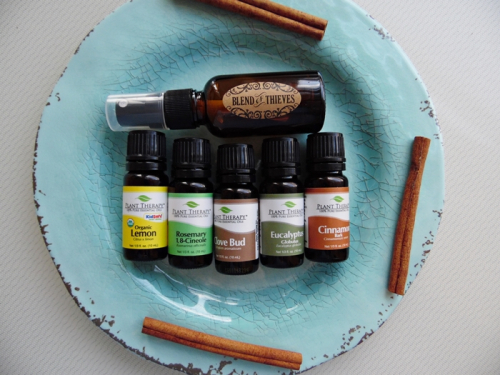 I now have Blend of Thieves Oil available in my Aroma Power Etsy Shop here.